The Third Democratic Debate: The Force is With Her

Steve tells you all you really need to know about the third Democratic debate.

I’ve been told that some of you read this column expressly for the purpose of getting the gist of the debate without having to sacrifice date night, so here is all you need to know: 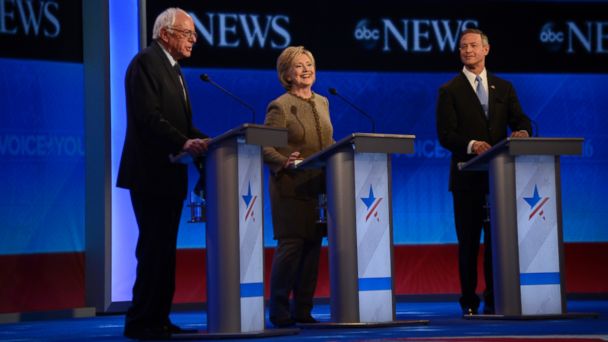 No matter what you ask Bernie Sanders, his answer is that (name of problem goes here) is rooted in the fact that our economic system is rigged, and that greed on Wall Street and the corruption of the democratic process by wealthy donors have caused a massive transfer of American wealth away from the middle class to a soulless, demonic, one-tenth-of-one-percent of the country. In this particular weekend with Bernie, nothing could be solved until this was fixed, and once it was fixed, everything would be solved.

No matter what you ask Martin O’Malley, there is absolutely nothing about (name of problem goes here) that he has not already taken on and solved completely in his decade as Mayor of Baltimore and then Governor of Maryland. To hear O’Malley tell it, you’d think Maryland had the biggest immigration problem in the universe, since he solved every single problem. The Freddie Gray protesters and the writers of The Wire may disagree, but then again, O’Malley is performing in an entirely different genre of programming that requires neither accountability nor artfulness.

And no matter what you ask Hillary Clinton, she manages to see just how complex (name of problem goes here) really is, efficiently laying out the contrasting approaches to addressing it, the pros and cons of each, and concluding that, in truth, the only real solution is a combination of all of the above. It demonstrates her command of policy, her flexibility and pragmatic approach to problem solving, and her acknowledgment that complex issues will only be solved if we all figure out how to work together in multi-national coalitions, bipartisan legislation, and actions which embrace all races, religions, and ethnicities. In short, it’s what you say when your poll numbers have achieved cruising altitude and you have already moved on to the general election, even as your companions on the stage cling to the delusion that there is a nomination to be contested.

So, was there any real news last night?

This writer has previously given Governor O’Malley praise for his idealism and passion, and O’Malley continues to play well to the portion of the Democratic Party that wishes one of those Kennedy grandchildren had actually amounted to something. O’Malley alone demanded that we accept the full 65,000 Syrian refugees that the U.S. has been asked to accept, and he was very aggressive in denouncing Donald Trump’s bombast: “Never surrender our values to billionaires with big mouths. The symbol of our country is not a barbed-wire fence, it is the Statue of Liberty.”

O’Malley also continues to say new and fresh things. He built upon a newly emerging gun-legislation strategy from the San Bernardino shootings, noting that, “ISIS training videos now promote that the easiest way to acquire a military-caliber assault rifle is at the gun shows.” Clearly, this gambit presages another run at the gun-show exemption by pointing out how it is easily exploited by domestic jihadists. (Yes, but you can practically hear red-states chanting, “the only thing that can stop a jihadist with an AK-47 is a good guy with an AK-47”). O’Malley also repeatedly emphasized the importance of local human intelligence operations (as opposed to vast metadata analysis) – both in the Mideast and domestically – to better understand our enemies and prevent more San Bernardinos.

Last night’s O’Malley was not the teddy bear auditioning for the VP slot. He was sharply critical of Hillary Clinton, accusing her of opportunistic flip-flopping, and he visibly enraged Bernie Sanders by once again questioning the Senator’s record on gun legislation. Perhaps O’Malley has realized that he has no leverage for the VP spot if his polling is stuck at 5%, so he clearly stepped up the volume. However, this leaves him somewhat between Iraq and a hard place: The friskier he becomes in denigrating Hillary to pump his poll numbers, the more he alienates the person who will choose the VP.

Bernie Sanders has evolved over the course of the debates. In each succeeding outing he has become less the whacky caricature looking for plutonium to power the DeLorean, and more focused and serious in his presentation. I mean, for heaven’s sake, his hair was combed last night. Bernie had a simply beautiful moment right at the outset of the debate, when ABC opened with the non-story of the news cycle – how a Sanders staffer had improperly viewed Clinton campaign data, which had been erroneously shared by a vendor. Sanders took the time to explain exactly what had happened: What was an accident, what was not improper, and what was improper. When Muir asked if he should apologize to Clinton, Bernie said, “I’m sorry,” adding an apology to his supporters.  In short, Bernie showed how it should be done: Own it, air it, and fix it.  Hey, there, Nixon, Bill Clinton, Ken Lay, A-Rod, Penn State, and the Catholic Church: This is how you do it.

Hillary Clinton continues to impress, both with her political shrewdness at how she handles the questions, and her clear command of the material. At one point, ABC’s Martha Raddatz had one of those woefully self-involved moments: Channeling her inner Woodward and Bernstein, she demanded that Hillary estimate her level of responsibility for the current chaos in Libya. Clinton was patient, steady, and weighed all of the historical factors that led to the decision to intervene… but she did not take the bait; she refused to give Raddatz what she wanted… a video mea culpa for the news cycle.

Hillary did, however, provide the clip that will no doubt bounce around Fox and Fiends for the next 48 hours, when she asserted that, “ISIS is using video clips of Donald Trump as a recruiting tool.” There’s blowback on the internet today about whether Hillary has proof of this statement. (My prediction is that Donald Trump will seize the Hillary and Martin O’Malley commentary about ISIS videos and pose the inevitable question: “Have you noticed how much time those Democratic candidates spend watching ISIS training videos? I mean, I’m not saying that I can prove they are ISIS, but…”).

Hillary also indulged in the fun new game that Lindsey Graham introduced in last week’s undercard: Show how appalling Donald Trump is by comparing him to newly elevated Republican Saint George W. Bush! Hillary glowingly spoke of how Dubya had repeatedly made clear after 9/11 that we were not at war with Islam, and how he had reached out to Muslim leaders to work together to address the challenges posed by radical Jihadists. There is no greater measure of how appalled the Democrats (and centrist Republicans) are by Donald Trump than to hear Lindsay Graham and Hillary Clinton praise George W. Bush’s wisdom in dealing with the Middle East. What???

The simple fact is that for both Republicans and Democrats, Paris and San Bernardino have caused a sharp pivot in the race towards security and expertise in the Middle East. This shift left Republican Ben Carson unable to even fake that he knows what he is talking about, and it adds still more gravitas to Hillary’s stature on the Democratic side. Syria, of course, is not something Martin O’Malley can say that he solved as governor of Maryland. And Bernie simply cannot blame the emergence of ISIS on the greed of the one-percenters. Both O’Malley and Sanders demonstrated knowledge and thoughtfulness about the Middle East, and perhaps the single most significant “daylight” between their positions and that of Hillary Clinton was on the topic of whether to focus solely on fighting ISIS in Syria or go after ISIS and regime change simultaneously. While both Sanders and O’Malley provided impressive analyses of the unintended consequences when the U.S. aids and abets regime change (sounding, by the way, weirdly like Rand Paul), once again Hillary seemed to flash a deeper level of insight, contending that the rebels in Syria will not work with us to fight ISIS unless we demonstrate that we are serious about removing Assad.

Hillary did sign off the evening with a deft wink (“May the Force be with you”) to the fact that few people were probably watching ABC last night. But after two hours of good, meaty substance, the steel was tempered further; the status quo reinforced. In the end, Hillary will be grateful for Bernie and Martin, as they are toughening her up for what promises to be a carnival show unlike any we’ve ever seen. But she is proving to be the Hillary Clinton some of us expected in 2008.

And this time, the Force is with her!
Posted by Tom Gardner at 4:02 PM