The latest from Steve on the GOP debate last night in Coral Gables...

The Four Horsemen of the Republican Apocalypse rode into the land of hanging chads on Thursday night, foreshadowing what will very likely be the final judgment of the primary season on Tuesday. It is said that the Biblical four horsemen symbolize Death, Famine, War, and Conquest.  Here’s the headline for this debate: Cruz is war, Kasich is famine, Marco Rubio has pretty much locked up the part of Death, and on Tuesday night, Donald Trump will be Conquest. 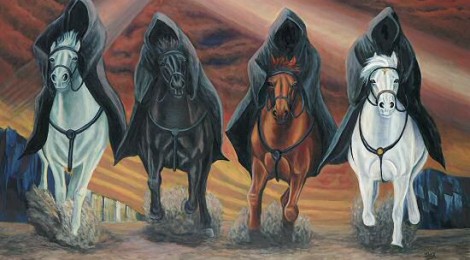 It was, of course, in this mythic land of chads that the election gods gave unto their forebears the seeming gift of the 2000 election, only to see that gift horribly morph into the Voldemort of Republican politics, the Presidency of George W. Bush.  The resulting catastrophic fissures in the Republican party led to the four horsemen of the Republican apocalypse: the Ideological Purists, the Social Conservatives, the Establishment, and the Outsiders. In this era of hopeless partisan gridlock and perceived unfulfilled promises of long tenured party statesmen, the unifying big tent of “Outsider” has emerged triumphant.

“Outsiders” are a bitter, angry, and deeply hostile insurgency against both a President they view as illegitimate and a party Establishment they feel has betrayed them. The Outsiders found their voice in the unfiltered rants of an arrogant billionaire; a man who boldly linked government ineptitude and failings to “political correctness,” thereby justifying a platform from which he felt not simply empowered but indeed obligated to launch highly offensive vulgarities at population segments that outsiders fear and loathe: immigrants who steal their jobs, Muslims (just another name for terrorist in an Outsider’s book), and a government that takes their money and their guns.

That bitterness, anger, and hostility has been the underlying theme of virtually every Republican debate, the very orchestra in the pit as the actors on stage shouted, bullied, and ultimately allowed their preening about pride and principle to pass into potshots about polls and penises.

And in Florida on Thursday night, the Four Horsemen were spent.

Each, for his own reason, had come to the conclusion that the screaming and the insults no longer served his best interests.

Each, through a unique calculus, arrived on the stage in a seeming quaalude-induced fun-house mirror inversion of his Detroit thug personna.

Few politicians in history have been whip-sawed in a single month like Marco Rubio. Amazingly, it was as recently as February 6 that Chris Christie publically mugged him and left his candidacy in the ICU on life support. Implausibly, Rubio rose back into the role of the Establishment favorite following a strong showing in South Carolina. Once again, the Establishment smooch proved a kiss of death; Rubio was slaughtered on Super Tuesday. He changed tactics and decided that the only way to beat Trump was to join him in the slime pit, a casting decision that only served to evoke the “Toad” character in American Graffiti, biologically incapable of being as cool as Harrison Ford. His reward: Trump’s thumping label as “little Marco” on national television, humiliating single-digit results on Super Saturday, and the realization that the issue was no longer could he win Florida, but could he avoid a career-crushing humiliation.

That was Marco’s calculus: to try to somehow recapture the form of his early promise – the sunny, upbeat optimism, the policy-wonk command of detail, and the fast-on-his-feet debate repartee that gave him the golden glow of charisma.

The truth of it is that Marco Rubio did, indeed, have the strongest debate performance of anyone on the stage. Four moments stood out.


One wonders if the rage against the machine – the bitterness, anger, and loathing in the Republican Party of 2016 -- was indeed ever open to Rubio’s inherently optimistic nature. But the fact is that if Rubio finally rediscovered himself on Thursday night, it was too little and it was way too late.

Donald Trump plodded through the evening with a decidedly muted tone.  It was acknowledged publicly that he needed to show he has the capacity to display a more suitable demeanor for the office he seeks.  What was most significant about Trump was what he did not do. There’s no doubt that Trump was angered and embarrassed by the manner in which Rubio shot laser darts through the thin shell that conceals Trump’s gelatinous underbelly of incorrect information and policy. But he did not start shouting to drown Rubio out. He did not scream about Rubio’s terrible performance in the primaries. He did not reference the sorry state of Rubio’s standing in Florida polls. And he did not call him a midget. Yes, friends, Donald Trump has figured out that the first step along the way to appearing “Presidential” is to stop being a complete asshole.

Ted Cruz is in a crazy position: If Trump wins both Florida and Ohio – thereby eliminated both Kasich and Rubio –Cruz achieves his long-cherished goal of going mano-a-mano with Trump.  But, ironically for Cruz, if Trump does eliminate Kasich and Rubio by bagging both winner-take-all goldmines in Florida and Ohio, his delegate lead may indeed be insurmountable.  Ted, cruz your poison.

But Cruz is shrewd, and he realized that the evening had somehow been unofficially declared “play-nice-night.” He seemed less visible, he was clearly less bellicose, even less oleaginous (thank you David Brooks, NYT, March 8) than in the past. He got in his shots at Trump, largely on his consistent contention that Trump is a compromiser, not a true Conservative, “he gave money to Hillary, to Kerry, to blah-blah-blah,” just with the volume set 20 decibels lower.

John Kasich spent the evening on his knees to the Buckeyes a thousand miles north, never having to say out loud the shocking truth: If Kasich can’t win Ohio, then the Republican Party can be absolutely certain of two terrifying things:


Indeed, in plush paneled Republican establishment clubs all across America, one can envision the old gas bags hoping and actually praying that a Kasich win in Ohio will cause every candidate to come to Cleveland short of a delegate majority.  You can practically hear them playing old Neil Young eight-tracks, and joining in on the chorus: “This summer I hear the drumming, four dead in Ohio.”

They’ll call this one the quiet debate, the civilized debate, the gravitas debate… whatever.

But the real point is simple: The debate was quiet and restrained because Donald Trump decided he had to make it that way… as has been the case every single step of the way, the other candidates allowed Trump to make the rules.

Trump thinks he has it won, and so now is the time to mend fences, join hands, and get the Party to unite behind him. So he stopped shouting, screaming, insulting, and degrading, and tried to call an end to the primary season so that the general election can begin. So there were no explosions, no fireworks, no vitriol, no loud bangs… just the quiet whimpers of acceptance.