Should He Stay or Should He Go?

That is the question. 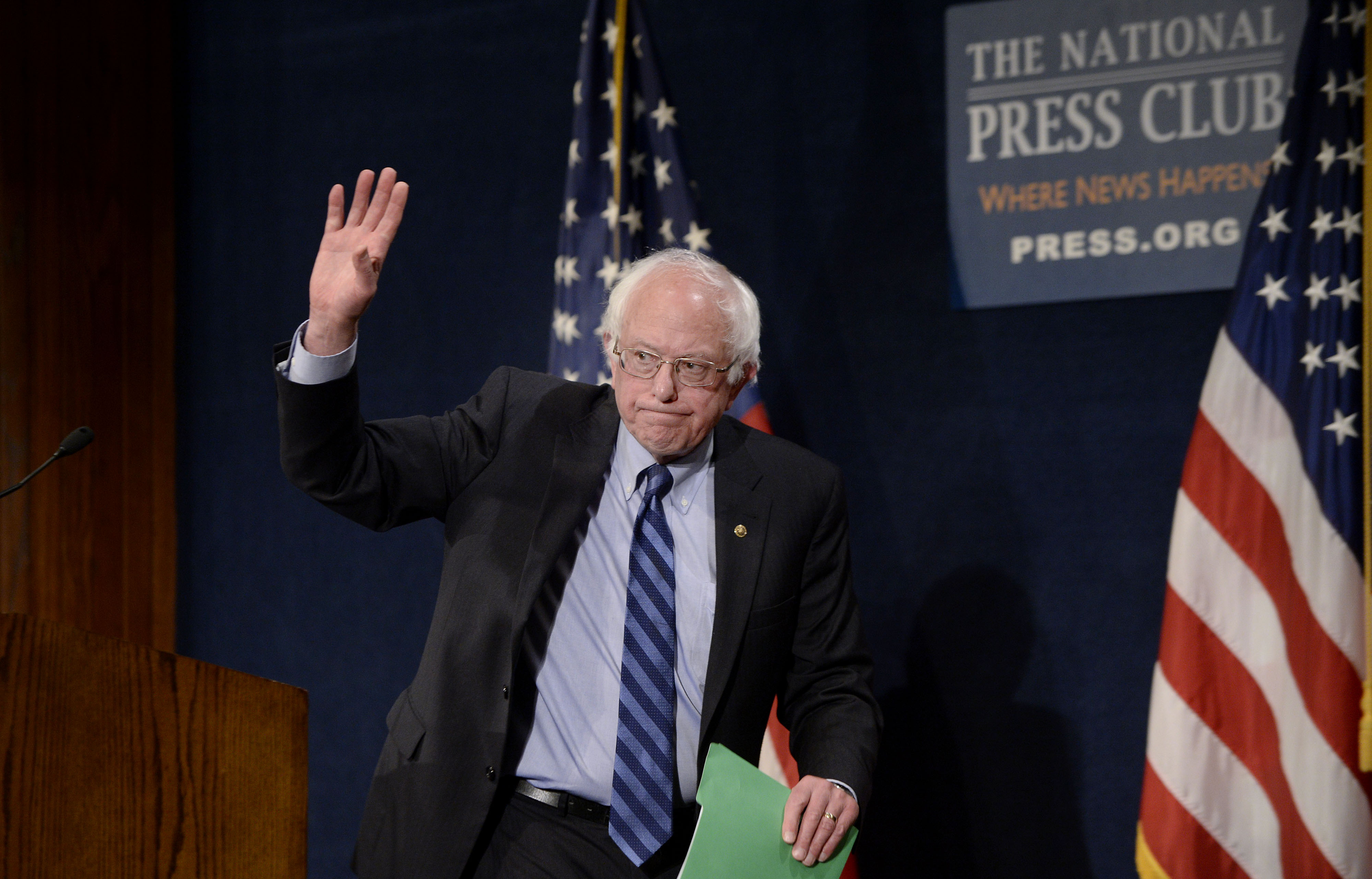 I have been having a running discussion with a very smart group of Sanders supporters to give me further insight on the rising Democratic national debate about Sanders’ prolonged campaign.  As readers of this blog know, I have been saying that, mathematically, Bernie has been tilting at windmills for a very long time; the die was cast for a Clinton nomination after Super Tuesday.  I would never have expected Sanders to drop out that early – because, you never know.  But the time for “you never know” has long passed.  We do know.  The nominee will certainly be Hillary Clinton.

The Sanders campaign may be long on emotion and short on facts, but they do have five core arguments for prolonging the campaign:  1) Sanders can still beat Clinton in the race for pledged delegates within the primary season; 2) Sanders fares better than Clinton in head-to-head polling versus Trump and thus superdelegates should be persuaded by that “fact” to flip their support from Clinton to him; 3) Sanders will bring a huge influx of young people to the polls, which is good for turnout this fall and the party in general; 4) the primary season was “rigged” against Bernie and, in effect, superdelegates should award him the nomination accordingly; and 5) if Sanders stays in until the convention, he has maximum leverage to influence the party platform.

Let’s take them in turn, analytically:

This has been a hard point to defend for some time now, and, at this stage, is borderline delusional.  As the chart below shows, Sanders needs to win 67% of the remaining 789 pledged delegates to get to a one-vote majority.

Sanders has won as many as 67% of the votes in a single primary, his home state of Vermont.  His next best showing was 60% in neighboring (and 96% Caucasian) New Hampshire.  He has won only 9 of 31 primaries (and only primaries remain) and in the other seven contests he had between 50% and 57% of the vote.  Thus the odds of Sanders’ suddenly racking up the required 70/30 margins are infinitesimal.

It is true that in May polls, Clinton leads Trump by +3 and Sanders leads Trump by +11.  But there are two good reasons to heavily caveat these results, if not completely dismiss them.

It is laughably early to rely on polls in May to predict outcomes in November.  Here are the results of May polling in the last 9 presidential elections.  Yes, they were wrong in 7 out of the 9, and the margins were usually wildly different.  They were never correct in a year when neither candidate was an incumbent, unless you count Bush in 2000 (he lost the popular vote but won in the Supreme Court Electoral College).  To go to a superdelegate and ask him or her to use May polling as a fact-base for flipping the verdict of an entire primary season seems ludicrous.

The second point is that GOP and its media surrogates have spent 25 years slamming and sliming Hillary Clinton, in the most wildly inflated terms.  They have not spent a single nanosecond doing the same to Bernie Sanders.  You can be sure that if Sanders made it to a general election, they would savage his known vulnerabilities (his self-proclaimed “Democratic Socialism,” the huge cost of his many pet programs, his 30+ years in Washington, DC, his age) and whatever else they might dig up.  His poll numbers inevitably would decline – just ask John Kerry.  Whatever you may think of Hillary Clinton, there is nothing new here for Donald Trump, especially if the FBI fails to indict her.  He may pound her, but he can only use information America has absorbed for 25 years.  And he is unlikely to touch Bernie’s most compelling attacks on her – her ties to Wall Street.  So the poll numbers reflect all known information on Hillary Clinton, while Bernie’s more or less reflect pristine treatment.

3)     Sanders will bring a huge influx of young people to the polls, which is good for turnout this fall and the party in general

No one can deny the throngs of young people that flock to Bernie’s events, or the impact they have had in the caucuses.  But Bernie has failed to translate that enthusiasm into primary victories.  Again, Clinton has won 22 of 31 primaries, and that is the best and only direct evidence of her true support.

Why does she win primaries?  Because she is attracting other segments of the Democratic coalition that actually do vote and are very large themselves – such as African-Americans and Hispanics.  These voters are less fond of Sanders because he represents a lily-white state, and they prefer to trust the decades-long track record of the Clintons in championing civil rights.  There were 30 million black and Hispanic voters in 2012, compared to 23 million voters under 30.

Did I mention “women”?

4)     The primary season was “rigged” against Sanders and, in effect, superdelegates should award him the nomination accordingly

I will start with a thought that still amazes me – Bernie Sanders did not become a member of the Democratic Party until 2015, and he did so for the single purpose of running for President.  Why in the world should he have been allowed to do that?  I personally think that you should be a long-standing member of any party – define longstanding as, say, five years -- to be able to stand atop its ticket.  Suffice to say, it is extremely generous of the Democratic Party to have such an open process.  (Perhaps they will close that loophole going forward.)

As I pointed out in my last post, the current primary/caucus system is actually tilted wildly toward the extremes of each party, which is why a Ted Cruz and a Donald Trump can emerge, and a Mitt Romney and a John McCain are forced to take conservative positions to win a nomination that are untenable in a general election.

Had the system been winner-take-all (as most elections are), or all primaries (and none of those crazy “zealots-only” caucuses), or conducted by direct national popular vote, or excluded independent voters entirely, Bernie would have fared worse.  In a winner-take-all system (which the GOP uses extensively), he would have come out with 500 fewer delegates.

And it is hard to imagine that debate-timing chicanery, or direct vote-stealing and whatever else the DNC is being accused of could possibly have cost Sanders to the tune of the 3 million vote gap between Clinton (13 million votes) and Sanders (10 million).  LBJ and Richard Daley could not have pulled off a fraud of that magnitude no matter how hard they applied their legendary election-stealing prowess.

5)     If Sanders stays in until the convention, he has maximum leverage in influencing the party platform.

I can’t deny the truth of this statement, but that is not to say it is therefore wise.

My view is that the paramount consideration here is to win the election and beat Donald Trump and the GOP.  So much is at stake – at least one and probably multiple Supreme Court justices, civil rights, women’s health rights, gun control, climate change, foreign policy turmoil and yes, income inequality, and many more – that “winning” should be the paramount goal.

Bernie Sanders wants to foment a revolution.  Not a bad goal.

Hillary Clinton wants to win the election.  That’s a better goal.  And history shows that the Democrats who win are more pragmatic and more centrist:  JFK, Jimmy Carter, Bill Clinton, Barack Obama.  And both parties have proven that more ideological candidates tend to get crushed (see: Barry Goldwater, George McGovern).

These goals are at cross-purposes.  The more leftward-leaning the platform, the less support our centrist country will give it.

Make no mistake, Bernie Sanders has done well.  He has made his points, made Hillary Clinton work for every delegate, challenged her from the left, upped her game.  But he lost the contest, and his lingering campaign is hurting the overall paramount goal.  When The New York Times runs a front-page lead-story headline like this…

…you cannot tell me that is helping.

Bernie is not going to drop out today.  He will see it through California.   But assuming he loses there, he should throw in the towel right then, concede to Clinton, give her a full-throated endorsement and rally his supporters to her.  Then we can finally get on to the main event.

And if the numbers were reversed, and Bernie was this much ahead of Hillary, I would say the same thing.  Because I was on the other side of this one once.  That was in 2008, when a fella named Obama was ahead of a challenger named Hillary Clinton, and I was imploring her to drop out.  And on May 20, 2008, she had only 146 fewer pledged delegates than Obama.  Right now Bernie’s gap is 274.