Hillary "Bounces" Back and Then Some, While Trump Surrogates Squirm

The data is in and the result is quite clear….Hillary Clinton easily won the Battle of the Conventions.  Two weeks ago she held a four-point lead versus Donald Trump, a margin he more or less eliminated with his convention bounce.  And now, with a set of post-Democratic convention polls in the books, she has volleyed back with a bounce of her own – a bigger one – and now is up by a healthy six points over Trump, 48/42.

It does not appear that anybody changed his or her mind over the two weeks (from Trump to Hillary or vice-versa), but rather that some of the undecideds have begun to express an opinion.  The undecideds have dropped from 14% to 9%, and of those five percentage points that shifted from undecided to one of the candidates, three-quarters of them opted for Hillary.  Clinton is now approaching the 50% threshold. Six points may not sound like much, but in recent presidential elections it is quite substantial.  For example, in 2012, there were 104 polls from July 1 through Election Day, and in that stretch, only once did Barack Obama average (in any five consecutive polls) a lead of six points over Mitt Romney.  While, of course, there are 97 days to go, and plenty of time for the race to twist and turn, Hillary Clinton has emerged from her convention in a commanding position.

The latest polls do not incorporate the full fall-out from the ongoing war that Donald Trump has declared on Gahzala and Khizr Kahn, who are proving to be every bit as effective in emasculating Trump on the interview circuit as they were at the DemCon podium.  Trump, true to form, has doubled-down on the Kahns, berating Gahzala’s silence at the DemCon podium, and Khizr’s right to critique him, to the disbelief of all Democrats, many Republicans, and all clear-thinking people, who are horrified that Trump is doing battle with Gold Star parents.

We’ll see how the polls come in over the next week to see if Trump continues to trend downward as the Kahn debacle continues.  And when we have more state-by-state polls, we will update our 50-state Electoral College look. 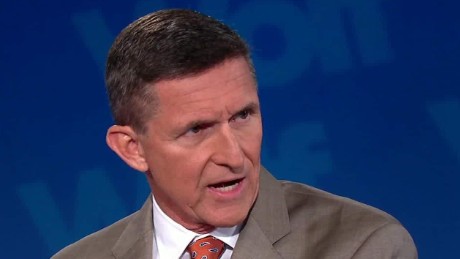 I’ll end with excerpts from an interview by Wolf Blizter on CNN with General Mike Flynn, a Trump surrogate and VP-short-lister, as he was twisted into a pretzel by Blitzer on two subjects:  whether Donald Trump should apologize to the Kahns, and whether John McCain is a hero.  I find it hard to believe he, Flynn, would not find the words coming from his own mouth to be personally humiliating.  It is beyond my imagination why he – or any Trump surrogate – would willingly tarnish his own reputation by aligning with and defending Donald Trump.  And in particular a three-star general on the topics of demeaning Gold Star parents and denying outright military heroism.

ON WHETHER TRUMP SHOULD APOLOGIZE TO THE KAHN’S

BLITZER:   But if you had a chance to speak to Mr. Trump today, what would you say to him? What should he do, as far as this family is concerned? Because our hearts clearly go out --

BLITZER: -- to this family. You know what it's like.

BLITZER: And you've had to speak with families -- who have lost a son or a daughter in combat. What should he say?

FLYNN: Yes. I mean, I just think that Donald Trump has to -- has to, you know, be honest about his feelings about this family and about what has happened to them. I mean, they've given the last true measure of devotion to the loss of their son.

So, you know, I'm not going to judge or state what Donald Trump has to say. I -- what I personally believe is that we have to obviously -- I do think that we have to show empathy to these types of people.

BLITZER: Should he call this family and speak to them and apologize to them?

FLYNN: Yes, I don't know. I mean, he can -- he'll decide to do whatever he wants to do. I do believe what we must do, though, is we must recognize that we are facing an incredible challenge around the world with this problem that we have.

ON WHETHER JOHN McCAIN IS A HERO


BLITZER: When John McCain was taken prisoner in Vietnam, he was a lieutenant commander I think in the -- in the Navy. He was held prisoner for six years.

BLITZER: He didn't want to leave his men behind, as you know. And Donald Trump, he got a lot of controversy when he suggested John McCain was not a hero because he was a --

BLITZER: -- POW. When you heard him speak like that about John McCain -- and you're a three-star general retired. What was your reaction?

I mean, I -- again, everybody has to make a judgment call here. We are -- we are in a -- we are on a path in our country, Wolf, that is, at least from my perspective and I think many others, is going in the wrong direction. And we have to get this country back on track to where we're not -- we don't turn around in four years or eight years or 10 years or by the middle of the -- by the middle of this century and we're suddenly a socialist nation.

FLYNN: You know, I think heroism has to be defined by each individual and by the people that know you.

BLITZER: What do you think?
FLYNN: I mean, I would look at it and just say all people who serve in the military are heroes, as far as I'm concerned, just by the fact that they stand up, sign on that dotted line and then they serve a Constitution and their buddies on their left and right. So, I mean, I define heroism in a lot of different ways. I mean, we clearly have Medal of Honor awardees who are -- I mean, who are extraordinary heroes. But I would just say, everybody sort of has their own personal --

BLITZER: But you don't think John McCain stands out as a hero, given the sacrifice, the service he gave this country?

BLITZER: So, you disagree with Donald Trump on this as well.

And I think that, you know, what we will see what Donald Trump continues to offer. But I personally believe that he has hit -- he's tapped into issues that this country is challenged by, and it goes well beyond what we're talking about right now.

BLITZER: So, the statements he's made about the Khan family and Captain Khan, statements he made earlier about Senator McCain, they haven't given you pause to reconsider your support for Donald Trump?

FLYNN: I think that the statements that have been made, and I -- and I think that the precision of them -- I think all -- the whole media needs to take a deep breath and go, OK, what exactly did he say? And listen to what he has said.

And, no it has -- it hasn't caused me to go, oh, wait a second. I believe what I believe and I believe that we have huge issues that we are dealing within this country going forward. And I'm not going to stand here and tell you that I discount any of the feelings or the sadness that the Khan family has had to endure for more than a decade, 12 years.