Tom assesses the past month with the usual array of analysis and numbers.  It ain't pretty.

I had originally intended to use a gimmick to recap this month, in essence by writing it three different ways:  from the left, from the right, and down the middle.  The intent was to dramatize the well-known tendency of us all to “pick our own” news and view events only through the lens that most resembles our own. 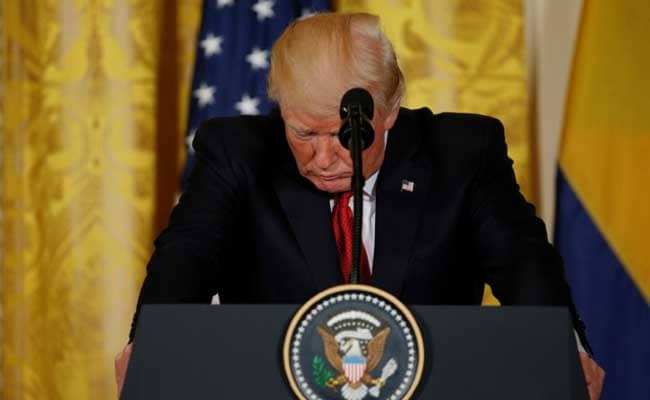 But, frankly, who would want to read about this month three different times?  July began on a discordant note, ended on a number of other discordant notes, and in between was an entire symphony of discordant notes.  Such is the state of the Trump Administration, which has struck only one positive sound in its six-month life, and that was Trump’s uplifting remarks of unity after the Steve Scalise shooting.  I am exhausting non-superlatives in describing the Trump White House; today’s word will be “execrable.”

The month started with the inexplicable and tasteless attack on Mika Brzezinsky – specifically for, of all things, some modest “facial work”, followed by the retweeting by Trump of a strange video portraying a cartoonish Trump wrestling a faceless, CNN–labeled opponent to the ground.  The strategy was clear – attack the mainstream media.  But there are countless tactics to choose to effect such a strategy, and these were among the most bizarre Trump could have possibly conceived.  (And the depiction of violence, however cartoonish, was particularly thoughtless in the wake of the recent Montana special election incident, when a congressional candidate literally punched a reporter on the eve of his special election, a race that he won anyway.)

Next Trump was off to the G20, making news by turning the US into an outcast by withdrawing from the Paris Accords, the historic global climate change agreement that fully 195 countries have signed, all except Syria and Nicaragua (the latter did not sign because they thought the Accords did not go far enough).   If you measure a person by the company they keep, we now stand with Bashar al-Assad.  Trump further fumbled with his meeting with Vladimir Putin, gently questioning Putin on Russia’s role in our 2016 elections, and apparently accepting his denials.  Trump later met with Putin in an unscheduled gathering to which he brought no one, not even an interpreter, and thus there is no record of what was said.

The main event of the month – at least until the events of last week, which we will get to – was the remarkable disclosure of an email exchange from last June between Donald Trump, Jr. and a Russian-connected music promoter, that corroborated, for all to see, the Trump campaign’s interest in exactly what it has been denying -- colluding with the Russian Government to discredit Hillary Clinton and elect Donald Trump to the presidency.  While Team Trump was quick to assert that nothing came of the meeting, even that assertion validated the intent – one is only left to conclude that if the Russians did indeed have something on Clinton, the Trump campaign would have been eager to take it.

The revelation of the Trump, Jr. emails was handled remarkably poorly, as every ensuing drip-drip of news revealed more and more Russians at the meeting, each with more nefarious (and relevant) backgrounds and connection to the “highest levels” of power.  Anyone who might have believed that the investigation was meritless was certainly de-fanged by this bombshell.

But two month-ending events rendered new meaning to the word “bombshell”, with the stars of the twin dramas being played out at either end of Pennsylvania Avenue being John McCain and Anthony Scaramucci.

Scaramucci burst upon the scene with the subtlety of a Molotov Cocktail and in ten short days managed to eclipse two titanic stories: the slow death of GOP attempts to repeal and replace Obamacare, and the ongoing public evisceration by Trump of his own Attorney General, Jeff Sessions.  After an almost-charming introductory press conference in which the Mooch promised to advance Trump’s agenda, he almost immediately instead launched open warfare on most of the incumbent White House staff, including Reince Priebus, Steve Bannon and the entire communications department he was now running.  His profanity-laced on-the-record tirade with The New Yorker reporter Ryan Lizza would have made Tony Soprano blush.  (It certainly makes you wonder what he might have been saying in private.)  First Sean Spicer was gone, resigning in protest to the Mooch’s hiring.  Then Priebus was out as well.  Finally, Scaramucci himself departed – his outlandish role in this drama, as it turned out, had an even shorter arc than Mike Flynn(10 days versus 19), when he was fired on the last day of the month by incoming Chief of Staff General John Kelly, with Trump’s blessing.

The other bombshell was the demise of the GOP efforts to pass legislation to repeal, replace, re-something, re-anything Obamacare.  To use the word “debacle” is an understatement for this so-called “legislative process.”  Mitch McConnell, genius legislator, managed to maneuver his party into a position where the only way forward was to vote for a measure that no one in his party actually wanted to see become law.  Huh?  This was the last-ditch so-called “Skinny Repeal,” which was the only bill left after the Senate voted down a repeal-and-replace bill rather easily (with 9 GOP votes along with the 46 Dems and 2 Indies), and then, also easily (7 GOP votes this time) a repeal-only bill.  Leave it to John McCain, reclaiming his tarnished “Maverick” label at his own darkest hour, just a week after receiving a diagnosis of glioblastoma (an insidious form of brain cancer), to kill the measure, joining Susan Collins and Lisa Murkowski of his own party as well as all the Dems and Indies.

It is becoming a bit tiresome to keep labeling the latest unit of time as Trump’s “worst” month/week/day.  But this was truly an utterly disastrous week, because apart from the normal wailing from the Democrats, this week it is the GOP faithful who were extremely unhappy and/or flexing their independent muscles across a number of issues.

·       The humiliation of Sessions raised the ire of the base, who consider the Attorney General a conservative icon and admire his moves as AG to advance the hard right agenda.  Sessions was the first Senator to back Trump, and thus all GOP eyes could behold that the loyalty Trump so fiercely demands is a one-way street.

·       Scaramucci was the proverbial kerosene-poured-on-the-blaze, resulting in the purge of Washington Establishment figures on Trump's team, with Spicer and Priebus gone and the smart money wondering if McMaster would soon follow.  There was no love for Spicer or Priebus among the GOP faithful, but the Scaramucci interview with The New Yorker was shocking to virtually everyone on both sides of the political spectrum.

·       Then there was the embarrassing announcement by Trump (via Twitter) that he was completely banning transgenders from the military.  He claimed that he took this action after consulting with nameless generals, but it ultimately came out that these generals did not include his own Secretary of Defense or the Joint Chiefs.  And this policy was swiftly opposed and roundly renounced on a bi-partisan basis, including many GOP military stalwarts, including McCain.

·        Congress then handed Trump a stinging rebuke in passing overwhelmingly, and on a bi-partisan basis, a new round of sanctions against Russia (as well as Iran and North Korea), not only countering Trump’s strategy of reducing Russian sanctions, and also effectively stripping Trump of the usual presidential prerogative to unilaterally ease them at any future time.

·       And the death of the health care bill was the ultimate promise-not-kept, art-of-the-deal-not-made, with much GOP muttering on who was to blame.  While McConnell was a primary villian, many pointed to Trump for refusing to engage in either the policy detail or in the selling of its alleged benefits --  beyond the oft-refuted claim that Obamacare was “imploding.”

·       Should we throw in the way-too-political speech to the Boy Scouts, of all people, which drew a public rebuke by their leadership for being inappropriate for the largely teenage-or younger audience?  Not to mention Trump infuriating police officials by encouraging officers to “not be too nice” to suspected criminals, advice that violates standard (and strict) procedures.

Where to now?  How can we possibly know?  But the GOP natives are getting restless – finally.  The Kelly move may prove to be a step in the right direction, especially since it is now clear that the entire White House staff, including Jared and Ivanka, will report to him.  But the GOP Congress has clearly demonstrated that they no longer neither fear Trump’s wrath nor will take his lead on policy.

Aren’t you glad you don’t have to read two more versions of this?

Trump’s approval rating continues to sag, yet another percentage point lost in a consistent downward trend.  These numbers remain bad for a president that presumably wants to be re-elected – he must get to the high 40’s at least for that to become possible – but they are not disastrous by historical standards. Any number of recent presidents fell into the 20’s, including Nixon, Carter and Bush 43.

Plenty of people question whether, with our extreme level of polarization, there is a “floor” on how low Trump can go.  Our view is that there is certainly a floor, but it is far closer to 20% than 40%.  Consider these numbers from Rasmussen, which breaks their approval and disapproval ratings further into “strongly” and “somewhat” subsets of each, and thereby gives more insight into the dynamism of these ratings.

As you can see, people are changing their minds about Trump, and quite dramatically since Inauguration Day.  (Note:  relative to other pollsters, Rasmussen historically favors the GOP, so these numbers are about three points higher than what you would see by averaging all the polls.)  The percentage that “strongly” approve of Trump has dropped by about a third, from 40% to only 27%.  And the “strongly disapprove” group has risen accordingly, up to nearly 50%.

So while the overall approval measure appears to be declining only gradually – a point a month, which is bad enough – the degree of approval is changing markedly, setting up the possibility for further change.  The GOP in total is hardly wedded to Donald Trump, only a subset of it.

It will be very interesting to see where all this goes in the next month, now that the GOP has failed in the health care arena, and Trump is alienating his own party.  Of particular note:  On the last day of the month, Trump’s approval rating on Rasmussen fell below 40% for the first time, to 39%.

Trump would do well to focus all of his tweets and public pronouncements on the state of the economy.  That he deserves credit for the solid economic performance is a dubious proposition, given his short tenure, but the facts are clear:  the momentum built in the latter years of the Obama Administration has continued.  Since January 20th, the unemployment rate has dropped further from 4.7% to 4.4%, the stock market is up 11%, the Consumer Confidence Index has risen from 114 to 121, the price of gas is flat, and the GDP growth has increased to 2.6% (though well short of Trump’s stated 4% goal).