Pack Up Those Two Trumps and Take Them Away

Like many Americans, I watched Donald Trump speak on both Monday and Tuesday nights, his speech announcing his Afghanistan strategy, and then his “campaign rally” in Phoenix, Arizona.  And the pattern we have observed post-Charlottesville – and throughout his presidency – returned.  There are two Trumps out there – let’s call them Trump One and Trump Two -- and they appear in a weird rotation, repelling each other in an ongoing orbit, reacting to each other, not quite polar opposites, since both inhabit Donald Trump’s body, but nevertheless they are completely at odds with each other – in temperament and in message. 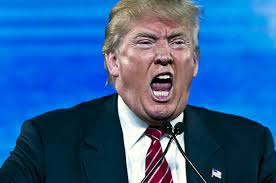 Trump One – obviously the “real” Trump – released an odd statement in the immediate aftermath of the Charlottesville tragedy, making moral equivalents of the neo-Nazis and their protesters, saying, in part, “We condemn in the strongest possible terms this egregious display of hatred, bigotry and violence, on many sides.”  Trump Two countered with a more measured statement on the following Monday:  “Racism is evil.  And those who cause violence in its name are criminals and thugs, including the K.K.K., neo-Nazis, white supremacists and other hate groups that are repugnant to everything we hold dear as Americans.”

Trump One countered with a vengeance on Tuesday in a press conference ostensibly on infrastructure, going on an extended, unscripted rant, defending his initial Charlottesville response, while a dozen officials squirmed behind him; his new Chief of Staff John Kelly was the very personification of mortification, his arms crossed, eyes affixed to the floor.  But Trump Two re-emerged on August 19, in response to protests in Boston: “Our great country has been divided for decades. Sometimes you need protest in order to heal, & we will heal, & be stronger than ever before!”

And in the latest duality, on Monday night, Trump One gave a straightforward address on Afghanistan, in which he declared, out of character, “"My original instinct was to pull out -- and, historically, I like following my instincts. But all my life I've heard that decisions are much different when you sit behind the desk in the Oval Office."  Like his predecessors, he chose to stay in and pursue a conventional strategy, complete with added troops. But Trump Two returned on Tuesday night in Phoenix, giving a hate-filled diatribe against his enemies, parsing his various Charlottesville statements so as to divine a consistency in them, and altogether giving evidence that he had become completely unhinged.  This, of course, was followed hours later by Trump Two, dutifully cleaning up with a unifying speech in Reno.

It’s easy to tell Trump One and Two apart.  Trump One is off-the-cuff, venomous, vitriolic, vituperative, vindictive, vengeful – and that’s just the “v’s.”  Trump Two, on the other hand, is glued to the teleprompter, mechanically pivoting from one screen to the other, stilted, lethargic, disengaged, sulky and sarcastic.  He is every bit the combative child, tossing off the insincere apology at the behest of his elders, itching to get on to the next misadventure.  There is no mistaking the two Trumps.  You can easily distinguish them, even with the sound off.

I stayed up well past my bedtime for the Arizona speech, and found myself spinning surreally between a sluggish wakeful daze, a fitful nightmarish doze, and an ever-present nausea.  I realized I had never watched a complete Trump rally speech before.  The effect was stunning.  The moment demanded, cried for, soothing words of unification, but instead Trump unleashed a revolting barrage of hate and divisiveness to all of his perceived enemies – protesters, Democrats, elites, both Arizona Senators (the “unnamed” Flake and McCain) and, of course, the hated media.  Trump spent incredible amounts of time defending his post-Charlottesville behavior and attacking the media, and outright lying again and again.  Unifier?  Jefferson Davis himself was a model of unification compared to this bilious onslaught.

Remember the days when presidents secured national attention with the Address-From-The-Oval-Office?  The President, accompanied only by the spare, somber dignity of that setting, stared right into the living rooms of America, and gravely informed the nation of the business at hand – calm, resolute, decisive.  JFK on the Cuban Missile Crisis.  Bush 43 after 9/11.  Reagan on the Challenger disaster.  Carter on the crisis of confidence.  No matter your party….did anyone doubt the gravity of the issue?  The magnitude of the message? The utter sincerity of the president?

Is anyone really fooled by all these Trumps?  Of course not.  Not those who support him, who love Trump One.  Not those who despise him, who see right through Trump Two.  Not even those who are “open-minded” to him – they are the ones who have dismissed him during his presidency, those on-the-fencers who have caused Trump’s approval rating to sink by eight points since January.

How about Paul Ryan?  Does he get it?  I watched his Town Hall, which immediately followed Trump’s Afghanistan speech.  Ryan expressed complete satisfaction with Trump Two in the aftermath of his post-Boston statement, believing that performance more than offset Trump One’s press conference performance and the initial statement.  Is that how it works in Wisconsin, Paul?  It’s OK to be an utter shit-heel on Monday, Wednesday and Friday as long as you pretend to be a pious soul on Tuesday, Thursday and Saturday?  Is that what you teach the children in your Sunday school class?  Integrity and leadership, children, can be measured neatly in a tidy balance sheet -- just make sure your credits outweigh your debits, and your assets inch ahead of your liabilities.  Like that?  Pretending to be a good person, occasionally, is the appropriate counterweight to actually being a bad one?

Of course Ryan gets it.  He is as cynical as anyone, carefully calibrating just how far he can go in critiquing Trump so as not to jeopardize his own seat, his own powerbase, his own aspirations.  In many ways, the Ryan’s of this world disgust me more than Trump.  Ryan has the ability to distinguish right from wrong, but lacks the fortitude to be honest.  I’m sure he abhors Trump, but he will not pull the trigger.  His pathetic attempt to talk tough on Trump – calling Trump’s “messy” performance at the press conference  “morally ambiguous” – was rightly called out by Jake Tapper – “it wasn’t morally ambiguous…it was morally wrong.”  Ryan further claimed that censuring the president would be turning Charlottesville into a partisan battle.  Huh?????  That actually makes no sense.

Bob Corker was right to question Trump’s fitness for office.  Tim Scott was right to say that Trump has lost his moral authority.  Susan Collins and Lisa Murkowski were right to vote down the insidious “repeal and replace” bill.  John McCain was right to call out and vote down an incredibly cynical legislative process.  Lindsay Graham names names.  We need more Republicans like them.  In fact, we may need exactly 19 of them at some point – 19 of them gutsy enough to vote “Yes” on Articles of Impeachment, to reach the magic 67 required to convict.

With apologies to Dr. Seuss:

Meuller cast down his net
It came down with a PLOP!
And he had them!  At last!
Those two Trumps had to stop.
Then he said to the Senate,
Now you do as I say.
You pack up those Trumps
And you take them away!'