BTRTN: Is the Biden “Hot Streak” Making a Difference?

Tom with the BTRTN August 2022 Month in Review.

Last month we wondered if anyone – especially Democrats!  -- had noticed that Joe Biden was actually putting together a very impressive record in his first 18 months on the job.  Since then, there have (finally) been an absolute torrent of articles and newscasts feverishly itemizing the Biden “hot streak." 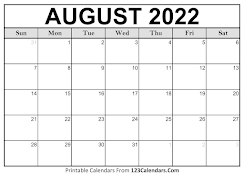 The question is, is it making any difference?  Is the winning streak moving the needle with respect to the Biden “scorecard” and Democratic prospects in the midterms?


Today we’ll focus on Biden, and while we will give a brief assessment of the midterms, we’ll be back on Labor Day, the traditional “kick-off” of the intensive campaign season, for an updated snapshot of the House and Senate landscape.

Back in February, at what was then a low point for the Biden Administration, we laid out a possible “road map” for Biden and the Dems to become competitive again in the midterms (particularly the House.  The roadmap required some action (e.g., legislation) and some luck.  Looking back, it is truly remarkable how “on point” Biden and his administration have been in making solid progress on that roadmap.

It is an impressive record, and it is true that Biden and the Democrats have seen an improvement in their fortunes on all sorts of measures.  But when you look closely at the data over time (below), two things become clear.  The first is that the recent (August) improvement is merely an “uptick,” hardly a “sea change.”  And the second is that that uptick is versus July – but not when compared to January, when everyone was sounding the death knell for the Democrats in the midterms.  At best, some measures have returned only to January levels, while others are still short of even that.  The problem is that Biden slipped quite a bit between January and July, and while the months passed, the adverse narrative was settling in cement.  And many of the achievements have come late in the game, after those months of decline.  The cement is not hard, but the work to remove it has just begun. 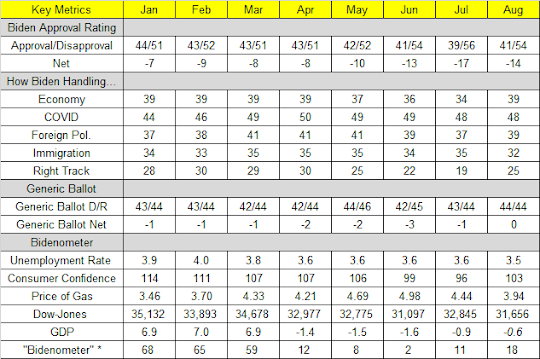 The data reveal that Biden has stopped the bleeding, and thus begun a comeback; he had not completed the job. His approval rating, for example, improved by two points in August, from 39% to 41%, but that returned it only to June levels; Biden is still a few points short of the 44% he achieved in January, and these points are crucial.  Keep in mind that Biden started out his presidency with a 55% approval rating.  August of 2022 is, in fact, the first month Biden has ever shown an increase, after 18 consecutive months of either declines or no change.

Biden’s record on key issues is slightly better – he’s basically back to January levels overall, slightly better on Covid and foreign policy, slightly worse on immigration and whether or not the country is on the “right track,” and about the same on the economy.  That last measure is somewhat of a surprise when you take a deeper look at key economic measures tracked in the BTRTN “Bidenometer.”  While each of the five measures has improved versus July, they are all worse – and in most cases considerably worse – than in January.  (See below for more on the “Bidenometer.”)

What does this mean for the midterms?  Again, we’ll be back on Monday with our latest snapshot, but a look at the generic ballot on the chart reveals a similar story as the other measures.  The Democrats have now pulled even with the GOP, a real improvement over the three-point deficit in June.  But this takes the Dems to a position that is only marginally better than in January, if that.  The generic ballot is a key predictor of the midterms, and our models show that an even generic ballot will translate, if unchanged, to a roughly 20-seat loss by the Democrats in the House on Election Day – more than enough to swing control to the GOP.

The Senate, however, is always far more driven by the candidates themselves, and the Democrats continue to hold an advantage.  This advantage has little to do with the Biden “surge.”  It has far more to do with the lopsided quality of the candidates in key swing states, such as Pennsylvania (a solid flip opportunity) and Georgia, where Mehmet Oz and Hershel Walker have been embarrassments for the GOP.  This advantage has been coupled with major Democratic advantages in fundraising, which is not a coincidence.  Great candidates in close races draw great financial support, while no one wants to back a loser.

As such, at this juncture, if the elections were held today, we see the Democrats having a 72% chance of holding the Senate, but only a 19% chance of keeping the House.  We'll be back Monday with more detail.

It has been a terrific run for Biden – in August alone, he killed Ayman Al-Zawahiri; passed the Inflation Reduction Act, the semiconductor bill and the Veterans bill; signed the executive action on student debt relief; saw a rapid downturn in gas prices; received FDA approval for a new vaccine; and the Mar-a-Lago Document-Gate blow up into a full-fledged mess for Trump (and thus the GOP).

There is clearly a hop in the Democrat’s step now, and good reasons for it.  But that is a long way from saying the midterms are now well in hand, or that a “sea change” has occurred to justify all those recent headlines.  There is still an opportunity to make that happen; the selling job has to be undertaken in earnest; the numbers simply need to rise much further.

Biden kicked off that process with a prime time speech last night that attempted to bring together an array of messages to do just that:  democracy under threat at the hands of Trump's MAGA; the GOP agenda of takeaways of basic rights; and the accomplishments of the Biden Administration despite the threats.  While the GOP has tried to make the elections a referendum of Biden, Biden was both inoculating himself against those attacks while making the election more about a choice between his way and Trump’s (or, even better, making the midterms simply a referendum on Trump).  Whoever succeeds in that messaging will come away with the spoils in November.

But as of now, it still looks like a split decision between the Senate and the House.

The Bidenometer is a BTRTN proprietary economic measure that was designed to provide an objective answer to the legendary economically-driven question at the heart of the 1980 Reagan campaign:  “Are you better off than you were four years ago?”  We reset the Bidenometer at this Inaugural to zero, so that we better demonstrate whether the economy performs better (a positive number) or worse (a negative number) under Biden than what he inherited from the Trump Administration.

The Bidenometer measure is comprised of five indicative data points:  the unemployment rate, Consumer Confidence, the price of gasoline, the Dow-Jones Industrial Average and the U.S. GDP.  The measure is calculated by averaging the percentage change in each measure from the inaugural to the present time.

The +18 for August, 2022 means that, on average, the five measures are 18% higher than they were when Biden was inaugurated (see the chart below).  With a Bidenometer of +18, the economy is performing slightly better under Biden compared to its condition when Trump left office.  Unemployment is much lower, consumer confidence is higher, the GDP is stronger and the Dow is higher.  On the flip side, gas prices have soared (as has overall inflation, of which gas prices are a primary component).

Using January 20, 2021 as a baseline measure of zero, you can see from the chart below that under Clinton the measure ended at +55.  It declined from +55 to only +8 under Bush, who presided over the Great Recession at the end of his term, then rose from +8 to +33 under Obama’s recovery.  Under Trump, it fell again, from +33 to 0, driven by the shock of COVID-19 and Trump’s mismanagement of it.  Now we have seen it move slightly upward to +18 under Biden.

If you would like to be on the Born To Run The Numbers email list notifying you of each new post, please write us at borntorunthenumbers@gmail.com.

For the generic ballot (which is not polled in this post-election time period), we take an average of the only two pollsters who conduct weekly generic ballot polls, Reuters/Ipsos and You Gov/Economist, again for trending consistency.

The Bidenometer aggregates a set of economic indicators and compares the resulting index to that same set of aggregated indicators at the time of the Biden Inaugural on January 20, 2021, on an average percentage change basis. The basic idea is to demonstrate whether the country is better off economically now versus when Trump left office.  The indicators are the unemployment rate, the Dow-Jones Industrial Average, the Consumer Confidence Index, the price of gasoline and the GDP.