Tom with BTRTN’s latest on the race for control of Congress.

We’ll be providing more frequent and briefer midterm updates as we head down the homestretch to Election Day, November 8.

Here are the highlights of this update: 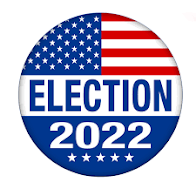 ·       The Senate races have shown some modest slippage for the Democrats, enough to slightly reduce the BTRTN odds of maintaining control of that body.  This is attributable mostly to better campaign performances by several notoriously weak GOP candidates, the oddball characters foisted upon the GOP by Donald Trump.  We have changed the rating of one race, moving Wisconsin back from a Democratic toss-up to a Republican toss-up.  This leaves the Democrats with one potential net pickup as of now, in Pennsylvania, and still a solid chance of holding the upper chamber.  (There are other possible flips by both parties, with nine races in play, including five we consider toss-ups.)

·       In the House, the Democrats have modestly improved their prospects as the full benefit of the August blizzard of accomplishment has been absorbed into September generic ballot polls.  But again, as with the August movement, the operative word is “modestly” – the Democrats remain rather severe underdogs in their quest to keep control of the House, though the likelihood of a complete blowout continues to lessen.

Here are the latest BTRTN odds of the Democrats maintaining each of the two chambers, the expected number of seats that will change parties, and some key metrics, all compared to prior updates. 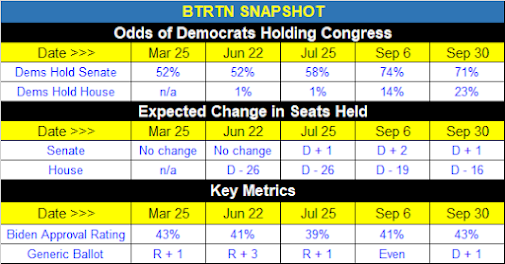 There is still plenty of time – five-and-a-half weeks -- for this picture to change.  Remember, these assessments are “snapshots,” not “predictions,” based on today’s conditions and data.  (We’ll get into the prediction business on November 7, the day before Election Day.)

We have noted before that Senate elections are far more driven (than the House) by the quality of the candidates themselves than the macro election environment (though they are not quite immune to the external fortunes that influence all politicians).  The Democrats continue to benefit from the weak array of candidates the GOP has put forward, especially Dr. Oz in Pennsylvania and J.D. Vance in Ohio (both attempting to replace respected mainstream GOP incumbents who are retiring), and Hershel Walker in Georgia and Blake Masters in Arizona (GOP recruits challenging seats that Democrats flipped in recent elections).  These candidates, all Trump-backed and all political neophytes, are improving their performance (how could they not?), but not by enough to change the dynamics of their races.

Republicans have improved their prospects in Wisconsin, though, as incumbent Ron Johnson has found his footing in fending off challenger Mandela Barnes, reversing polling trends in August that had Barnes modestly ahead.  Wisconsin is the only race in which we have made a rating change from our last update.

On average, Democratic candidates' collective lead in the polls, across our nine swing states, was +2.4 points in September (based on a total of 49 polls), a drop from +3.4 points in August (34 polls), which explains the modest drop in our BTRTN odds of the Democrats holding the Senate, from 74% to 71%, which is still quite strong.

There are nine “battleground” Senate elections (races in which both parties have a legitimate shot of winning) and the Democrats are ahead in five of them.  They appear to be successfully defending four of those seats, and have a good chance, at this juncture, of flipping Pennsylvania.  The GOP is ahead in the four seats that it is defending.  But most of these races are extremely close, with five of them designated as toss-ups. 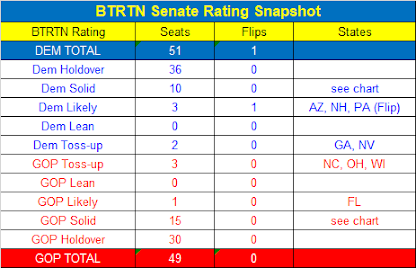 The chart below lists all the Senate races, with a focus on the nine battleground races between the two purple lines. 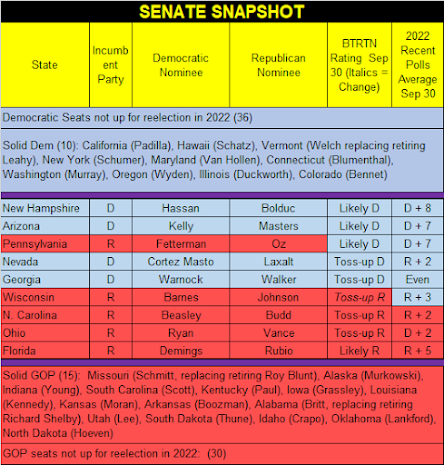 Perhaps the most important value of these snapshots a is to help volunteers and donors decide where to focus their efforts.  For Democratic volunteers, our guidance would be to prioritize the races as follows.

·        Top tier would be George and Nevada, two tightly-contested toss-up seats the Democrats must defend, and Pennsylvania, a flip well within grasp.

·        The next tier would be to bolster New Hampshire and Arizona, to prevent those race dynamics from slipping (the GOP candidates have made slight inroads in both thus far)

·        Then Wisconsin, North Carolina and Ohio, all within reach as flips

·        And, finally, Florida, where we remain highly skeptical that Marco Rubio can be beaten

Unlike the Senate, House election outcomes are far more driven by the macro election environment than by individual candidates.  The most important number to watch in terms of predicting how many seats the Democrats will lose is the generic ballot.  This polling question has, over the years, been very highly correlated with gain/loss outcomes, especially in the midterms (which do not have a presidential race to affect turnout and down ballot preferences).

The Democrats have made progress in the generic ballot over the past four months, flipping a Republican lead of +3 to a Democratic lead of +1.  The problem is, given the disproportionate GOP representation in the House (due to overrepresentation of small states and effective gerrymandering), the Dems need to do much better than D+1 to have the upper hand in controlling the House.  For this race to become truly competitive, the Dems need to build their generic ballot advantage to D+3 or even D+5.

Which leads is to the second problem:  Democratic momentum appears to have stalled, at this point.  In the month of September, generic ballot polls in the second half of the month actually showed slight slippage, from D+1.1 to D+0.5.  Not much, of course, but certainly a sign of stalled momentum, if nothing else.

But the progress for the month of September versus August – doubtless reflecting the “fully baked in” effect of the August accomplishments into September public opinion – have lifted the Democrats’ prospects for holding the House from 14% to 23%, according to our models, and the mode number of seats lost has dropped from -19 to -16.

Here is how the races line up.  As you can see, even to achieve this rather modest level of loss, the Democrats have to win the vast majority of toss-up races. 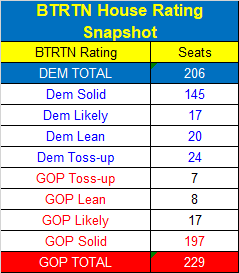 Here is a list of those 31 toss-up districts and our ratings for each.

We’ll be back in two weeks with another update.  Stay tuned.
Posted by Tom at 8:56 AM