BTRTN: The Midterms, the Insanity & the PM Shuffle

Tom with the BTRTN October 2022 Month in Review.

Most of October’s news was dominated by the midterms, as the Biden/Democratic comeback that looked so promising in September fizzled in the fall.  At first brush, there appeared to be three “October Surprises” - OPEC’s shocking plan to sharply cut oil production; the abortion-littered history of vocal anti-abortionist Hershel Walker; and the painful debate performance of John Fetterman.  But none of them have upended the midterms as one might have expected – Walker seems to be positively thriving despite the revelations, Fetterman does not appear to have been hurt either, and gas prices keep a-tumbling.  What is also tumbling, though, are the odds that the Democrats will maintain control of both Houses of Congress, now down to 54% for the Senate -- essentially a toss up with the barest of tilt to the Dems -- and 9% for the House.  (For full details, read our update from last Friday:    http://www.borntorunthenumbers.com/2022/10/btrtn-midterms-snapshot-for-dems-house.html, or wait until our new one this coming Friday.) 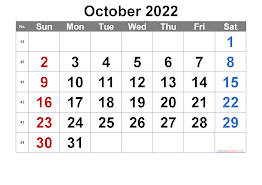 Why have the Democrats’ fortunes plummeted so quickly?  Perhaps the simplest answer is the right one:  the October 13 inflation report that showed more roaring prices, +8.2%, despite five separate Fed rate cuts in 2022.  This was the last inflation report before the midterms, the last chance for the Democrats to be able to point to progress on the most important issue to voters and one that favors the GOP.  After that report, Republican candidates across the land re-loaded and doubled down on the economy (as in, "it’s the economy, stupid"), and the Biden Administration was reasonably helpless in countering the assault.


Not that they haven’t tried, and not that they lack for counterarguments.  As stated, gas prices, OPEC-bluster notwithstanding, resumed their declines and have done so for three weeks now.  There was another healthy increase of 263,000 jobs in the month and the unemployment dropped to 3.5%, matching its lowest level in 50 years.  The GDP grew at a 2.6% annualized rate for the third quarter which, while not exactly robust, was also far from recession-land, and quite an improvement over the prior two quarters, which each showed modest contraction. But in the upside down world we live in, where good is bad, both the jobs and GDP reports were viewed as evidence that the Fed efforts to tamp down consumer demand and fix inflation were simply failing.  Can’t you hear Biden sighing?

The rest of the month’s major news was routine, involving merely the usual insanity around the potential destruction of the planet, perhaps preceded (and accelerated) by the demise of Western democracy.

Under the former comes the ongoing saga of Putin’s Folly in Ukraine.  Putin is not the first powerful leader to squander his claim to history to the almighty whims of hubris.  Putin’s desire for Ukraine swallowed all rational thinking on the matter, much like a black hole, leaving only a gigantic void where analysis might have led him to reconsider.  Ukraine, after all, has the largest armed forces in Europe and is of deep strategic importance to the West.  The notions that the Ukraine government would lay down like the Afghan government, their people would welcome the Russians as liberators, and the West would divide and dither, have proven to be an epic trio of miscalculations.

But rather than cut his losses in the face of Ukraine and Western resolve, (and massive, land-retaking offensives by Ukraine) and find a way to declare some minor victory en route to an exit ramp, Putin has instead decided on the unthinkable.  He not only reversed himself and instituted a draft, which was shocking enough, but more shockingly has raised the topic of nuclear weapons.  You know the old joke about “minor surgery,” which is surgery performed on someone else.  Well, now we have “tactical nuclear weapons,” which are weapons that you think can be realistically deployed on some other country without consequence.  Biden and the G-7 issued warnings to the contrary.  And this is how the planet gets threatened, because there is no long game once you start trading nukes.

But if nuclear weapons don’t destroy the planet, climate change certainly could, at least at the rate we’re going.  The new UN climate change report states that with current efforts to curb greenhouse gasses, carbon emissions will actually rise by 10% by 2030, which is obviously headed squarely in the wrong direction.  One might think that the energy crisis brought on by Putin’s Folly would serve to accelerate the rate of change, since, apart from climate change effects, it demonstrates the futility of energy dependence on enemies.  But no, instead there is massive pressure to increase oil production, including in the United States, especially in the face of the OPEC announcement.  The way to avoid more short-term pain is to accelerate investment in renewables, not by investing in more of the drug.

Climate change and nuclear weapons can only be managed properly by enlightened, progressive leaders.  What do we have now?  The Security Council of the UN is comprised of five countries who also happen to be the ones considered “Nuclear Weapon States” – the United States, Russia, the UK, France and China. Let’s look at the leadership of each. Putin seems to be following the career arc of Rudy Giuliani, living in a rational-thought-free zone; China’s Xi has maneuvered himself into Strongman for Life status; Macron of France is periodically threatened by des fous on the right.  The US is just a recession away from the return of Donald Trump, who now understands much better how to de-guardrail the entire government.  The only hope here is that they don’t allow him access to the Big Button while he runs the country from Leavenworth.  As for the UK, they are now passing the nuclear football around like the desperate laterals on the last play of a lost game, David to Theresa to Boris to Liz.  Rishi Sunak now has the ball, at least until he is forced to call a snap election. Clearly, this is not a stellar moment for Western Democracy.

But at least the UK holds its leaders accountable when they stumble, which is more than we can say for the US, where roughly 300 election deniers are running for office in national and state elections, in 48 out of 50 states.  Liz Truss’s economic policies – the ones that forced her to resign in a record-shattering 45 days – are virtually identical to those that headline the GOP playbook in the US.  That is, she proposed to cut taxes for the wealthy justified by the hoary canard of supply side stimulus -- and yet, while Truss went down, the GOP is decently positioned to take back both Houses of Congress one week from today.

The month ended with the beating of Paul Pelosi, the speaker’s husband, by a crazed right-winger who had been overdosing on conspiracy theories (these theories essentially comprise the non-economic portion of the GOP platform), and was looking to assault and kidnap Nancy Pelosi.  Such violence should not be surprising; it is the natural follow-on to January 6.  It is sickening, and the only logical next step seems to be the killing of a federal official.

But even more sickening, if at all possible, than the beating itself has been the GOP response to it.  Only Mike Pence and Mitch McConnell issued quick, full-throated denunciations of the assault.  Other Republicans have been slower (notably, Kevin McCarthy) to do the same, and some (notably Donald Trump) have said nothing at all.  Then there is the matter of the concerted right-wing effort to re-position this horrific tragedy as a homosexual love affair gone bad.  Elon Musk, proud new owner of a social media platform with 400 million active users, is doing his best to spread this tidbit of fake news.  There are few clearer signals that the threat to our democracy is rising sharply with each passing day.

We are long past the time for shouting “Have you no decency, sir?” and expect that to have some impact.  The only thing we can do – and must do – is vote blue ourselves, and get out the blue vote.

The data show little change for Biden and the Democrats in October.  Biden’s approval rating remains at 42%, and his issue ratings continued extremely modest incremental improvement.  The generic ballot now favors the Republicans by two points.  The “Bidenometer,” our aggregate record of economic performance, made a significant jump upwards 24 to 37 (more on the Bidenometer below). 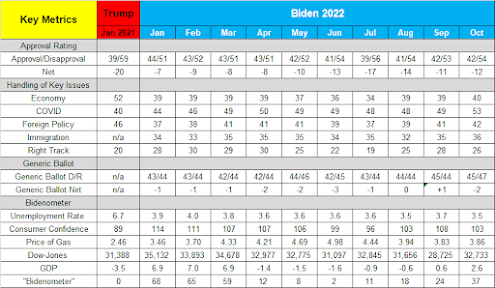 The Bidenometer is a BTRTN proprietary economic measure that was designed to provide an objective answer to the legendary economically-driven question at the heart of the 1980 Reagan campaign:  “Are you better off than you were four years ago?”  We reset the Bidenometer at this Inaugural to zero, so that we better demonstrate whether the economy performs better (a positive number) or worse (a negative number) under Biden than what he inherited from the Trump Administration.

The Bidenometer measure is comprised of five indicative data points:  the unemployment rate, Consumer Confidence, the price of gasoline, the Dow-Jones Industrial Average and the U.S. GDP.  The measure is calculated by averaging the percentage change in each measure from the inaugural to the present time.

The +18 for August, 2022 means that, on average, the five measures are 18% higher than they were when Biden was inaugurated (see the chart below).  With a Bidenometer of +37, the economy is performing markedly better under Biden compared to its condition when Trump left office.  Unemployment is much lower, consumer confidence is higher, the Dow is higher and the GDP is stronger.  On the flip side, gas prices have soared (as has overall inflation, of which gas prices are a primary component).

Using January 20, 2021 as a baseline measure of zero, under Clinton the measure ended at +55.  It declined from +55 to only +8 under Bush, who presided over the Great Recession at the end of his term, then rose from +8 to +33 under Obama’s recovery.  Under Trump, it fell again, from +33 to 0, driven by the shock of COVID-19 and Trump’s mismanagement of it.  Now we have seen it move upward to +37 under Biden.