BTRTN Midterms Snapshot: The Race for Senate Control Simply Could Not Be Tighter

Tom is back with BTRTN’s last "snapshot" of the race for control of Congress.  He will be back on Monday, November 7, 2022 at 5 PM Eastern with the official BTRTN election predictions.

Our latest BTRTN midterms snapshot highlights are as follows:

·        Senate.  The Senate, if at all possible, is even tighter than it was in our last update of a week ago, with all eight races within three points or less (and all but one within two points   or less).  We still have the Democrats maintaining control by   the slimmest of margins.

·        House.  The odds of the Democrats maintaining control of   the House continue to be quite low, and the key question remains not whether the GOP will take the House, but by   how much.

·        Governors.  We expect the Democrats to flip two state houses rather easily, but there are only five other competitive races that offer realistic flip opportunities, barring some potential last minute surprises.

·        Priorities.  Democratic volunteer and donors should focus their efforts on the highest leverage Senate races, which are NH, AZ, NV, GA and PA.

Here are BTRTN's latest odds of the Democrats maintaining control of each of the two chambers, the expected number of seats that will change parties, and some key metrics. 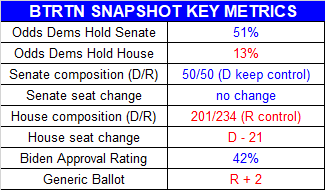 There is still time for this picture to change.  Remember, these assessments are “snapshots,” not “predictions,” based on today’s conditions and data.  (We will make our official predictions on Monday, November 7, the day before Election Day, at 5 PM Eastern.)  But time is running short for late-breaking “November surprises” that could stop or reverse GOP momentum.

If ever there was a time to work hard and get out the blue vote, this is it.

Senate battleground race polls have tightened considerably over the past four months, and the Democratic candidates’ collective lead over their GOP counterparts is now nearly negligible.

We have made two ratings changes in the Senate, both in the direction of the GOP, and one of them resulting in a party change.  We now see Nevada flipped into the Republican column, though still a toss-up, with Democratic incumbent Senator Catherine Cortez Matso now chasing GOP challenger Adam Laxalt by a very slim margin.

There continue to be eight “battleground” Senate races (races in which both parties have a legitimate shot of winning). The Democrats need to win four to maintain control of the Senate, and they remain nail-bitingly ahead in three races that feature incumbents, as well as in Pennsylvania, which would be a "flip."  So, if with Nevada flipping to the GOP, in this current “snapshot” the Democrats continue to hold the Senate.  But their position is very tenuous, with the momentum steadily moving to the GOP, seemingly with each new round of polls. 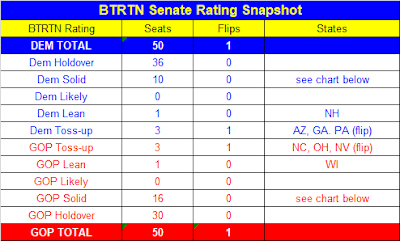 The full range of potential outcomes is demonstrated below; there is a 51% chance the Democrats will maintain the Senate by controlling 50 or more seats, but they could also end up with only 48 or 49 seats and hand the gavel to Mitch McConnell. 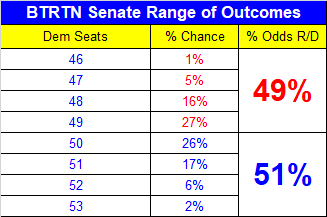 The chart below lists all the Senate races, with a focus on the eight battleground between the two purple lines. 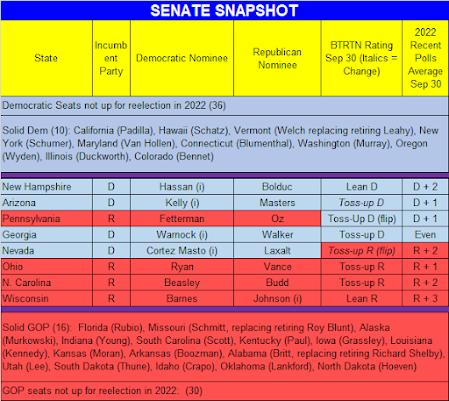 For Democratic volunteers and donors, our guidance would be to focus only on five Senate races, the ones held by the four incumbents (GA, NV, NH, AZ) and Pennsylvania.

To understand the dynamics of House races, the best indicator, by far, is the “generic ballot."  This polling question has, over the years, been very highly correlated with how many seats each party gains or loses in the midterms.

That is bad news for the Democrats, because the generic ballot continues to favor the GOP by +2 points.  If the election was held today, the Democrats would have only about a 1 in 8 chance of holding on to the House, according to our models.

As we have pointed out before, even when the generic ballot was a dead heat, as it was just a few weeks ago, that did not mean the race for control of the House was a dead heat then as well.  Given the disproportionate GOP representation in the House (due to overrepresentation of small states and effective gerrymandering), the Dems need to do much better than even in the generic ballot to have the upper hand in controlling the House.  For this race to become truly competitive, the Dems need to build their generic ballot advantage to D+3 or better.  Should there be no change in the last few days, the Dems are looking at a loss of 20 seats or more.

There are a whopping 36 gubernatorial races, more than two-thirds of all state houses.

There are only five races that are truly competitive at this point, and four are toss-ups. Among the races that are not competitive are the only two states where we see flips in this snapshot, Maryland and Massachusetts.  Both are blue states but have GOP governors who have termed out, Larry Hogan of Maryland and Charlie Baker of Massachusetts.  Both will almost surely be replaced by the Democratic candidates in the races to succeed them, Wes Moore (in Maryland) and Maura Healy (in Massachusetts).

We have changed our rating in Nevada from Toss-up D to Toss-Up R, as recent polling has moved just enough for us to believe that Joe Lombardo has moved slightly ahead of incumbent Democrat Steve Sisolak.

There has been much media attention to several governor races that are getting closer, notably New York state.  While the race between Governor Hochul and challenger Lee Zeldin has tightened from a double-digit Hochul lead to a high single-digit Hochul lead, at this point (snapshot!) we still see this as a win for Hochul and have New York in the “Solid D” bucket.  But we will keep an eye on it. 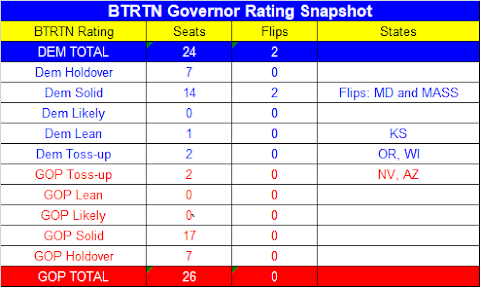 Here are the details on those five battleground races.  The focus should be on those toss-up races and Kansas. 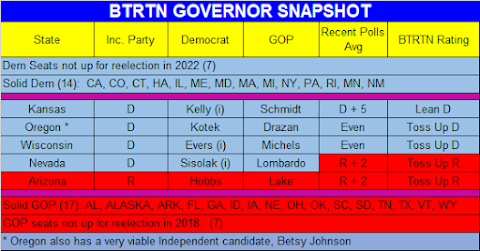 Again, we’ll be back with our final official predictions on November 7, at 5 PM Eastern.