Each presidential campaign cycle always seems to amaze in new ways.  We are dumbfounded at the epic spending increases every four years and the corresponding downward spiral in the quality of the discussion of issues.

But this cycle has already been a stunner and there are still 462 days until Election Day.  In terms of decorum, this run makes 2012 seem like tea at Downton Abbey.  Remember the days when Michelle Bachmann and Herman Cain set the standard for bombast in the guise of candor?  And how they made flamethrowers like Rick Santorum and Newt Gingrich seem “serious” as potential nominees?  Those were the days. 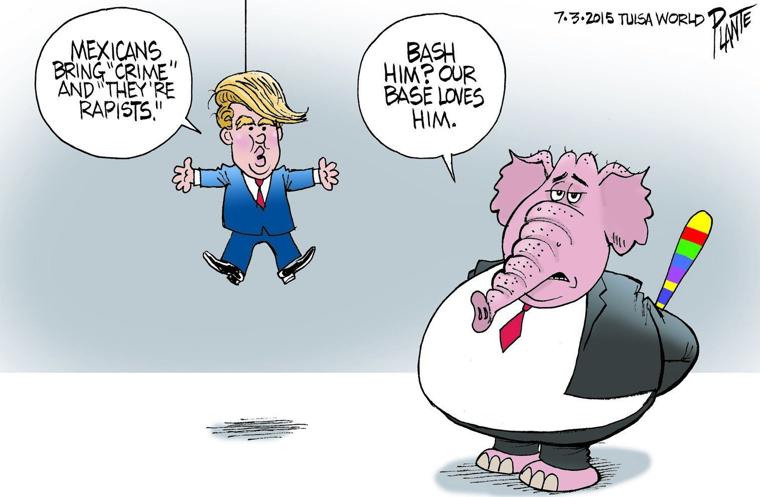 Let’s not minimize or dismiss Donald Trump’s impact thus far.  It is not enough to say that he has (to quote the most widely-used analogy of our time) “sucked all the oxygen out of the room” in terms of media attention and “turned the GOP race into his own reality show.”  It is well beyond that.  He is a high-speed train wreck, obliterating a hallowed (if, at times, circus-like) political process.  There is no policy discourse underway in any form, no serious assessment of the vast array of GOP candidates, and thus no logical progression toward a winnowing of the field.  This is uncharted territory.

It gets worse.  Instead of expressing outrage over Trump, the GOP candidates – almost all seasoned governors or senators – are instead emulating him.  They note Trump’s success in raising his already high profile with outrageous comments about undocumented Mexican immigrants (“they’re rapists”), John McCain (“he’s a hero because he got captured”) and giving out Lindsay Graham’s personal phone number.  And thus we have Rand Paul taking a chain saw to the tax code, Graham destroying his cell phone in multiple ways, and Mike Huckabee invoking the Holocaust to critique the Iran nuclear deal.  It is appalling.

Trump could dominate events for months, particularly if he scores well at the August 6 debates, an event tailor-made for his sound-bite skill set.  With no voting whatsoever until February, and Trump’s own billions in the mix (he’s the only candidate that needs no Adelson-esque billionaire to carry him through), he is built to last.  And even if the GOP rejects him, he can continue his quest in an independent run, a la Ross Perot, and easily pick off the entire Tea Party vote, say 15-20% of the electorate.  He is the GOP’s worst nightmare.

Jeb Bush will attempt to ignore Donald Trump at the first debate, or perhaps deflect him with humor (not Jeb's strong suit).  Someone may attack him, perhaps someone who has determined that he or she has nothing to lose by doing so.  But because of the debate rules – only the top ten, as ranked in recent national polls, will qualify to be on stage – the truly desperate will not even have this chance.  Perhaps Chris Christie if he makes it…but one does not need much of an imagination to see how Trump might respond, since Christie is a very easy target for scorn.

While all this is going on, another race is underway, that is, Hillary Clinton against herself.  The Hillary Clinton who by any standard is an exceptional candidate is running against her own propensity for secrecy and obfuscation, a working press starved for stories on the Democratic side, and an array of GOP billionaires obsessed with bringing her down.  Every month brings another revelation in the email story.  Hillary can probably survive what has been revealed thus far, but are there still others out there that could add up to the proverbial thousand cuts?  Thus we are watching another train rolling through the American political landscape, the slow-moving Hillary Special, as it deflects various impediments on its tracks and plows on with ever more dented armor, hoping it arrives before it derails.

Let’s get to the facts.

There are now 22 officially declared presidential candidates, five Democrats and 17 (yes, 17) Republicans.  Everyone is in now, with the possible exception of Joe Biden who, noting the dents in the Hillary Express, is now feeling around for interest in his candidacy among non-committed Democratic donors.  The 46th President of the United States will thus be one of the people in the chart below, or Biden (or perhaps Michael Bloomberg if he gets too disgusted by what he is seeing and makes a successful independent run):

The polls clearly capture what Jeb Bush has termed the Trump “phenomenon.”  Trump is atop the national polls and in New Hampshire, and is second in Iowa.  The McCain flap, which I admittedly thought would ruin him, only fueled him.  (Why I did not recall the lessons of Swift Boat, I do not know).

The use of the national polls to determine the GOP debate roster has resulted in a spate of campaigning outside of Iowa and New Hampshire as well as the rise of those absurd attention-getting acts.  Right now, Trump, Bush, Walker, Rubio, Carson, Paul, Huckabee and Cruz seem headed for the stage, with Christie, Perry, Santorum, Kasich and Fiorina on the bubble for the last two spots, and Graham, Jindal and Pataki the true bottom-dwellers.

Scott Walker has a reasonable grip on Iowa.  Clearly his message is working there (and the debates can only hurt him – he has to worry about seeming naïve or under-informed on foreign policy issues).  But Trump has dispensed with Bush’s hold on New Hampshire, and Kasich has jumped into the fray there and also made a dent.

Having said that, Bush and Walker have held up reasonably well in the polls against the Trump rise.  But the rest of “hard right” candidates are getting hurt, having failed to distinguish themselves as yet, and now outflanked on the  “outrage” positioning by Trump.  That leaves all of them – Cruz, Rubio, Paul, Huckabee and Carson – searching for an opening.

On the Democratic side, Bernie Sanders is making some headway on Hillary, but even with his gains he is still trailing Clinton by an enormous margin, and his momentum in Iowa and New Hampshire has slowed.  There is some wisdom in the notion that huge crowds do not translate into primary/caucus votes, and Bernie has a long way to go.  But aside from the unannounced Biden, there is no other Democrat who has attracted any poll attention at all.

Our new unique measure of Hillary Clinton’s electability, the “Hillometer,” fell again, from 19 to 16, the second straight month of decline.  Her average margin over the Top 3 GOP candidates (Trump, Bush and Walker) is still an exceptional 8.2%, but this is heavily influenced by a 15-point gap over Trump; her margin over Bush is now a mere 4 points.  Her own approval rating has dipped again, from 46% to 44%, and that falloff needs to be arrested very soon.

President Obama’s approval rating remains entrenched at 46%, for the eighth straight month (except in April when it rounded up to 47%).  Neither snow nor rain nor heat nor gloom of night, nor Iran, Charleston, Ferguson, the unemployment rate, the GOP or the Koch’s can shake Obama from this number, up or down.  If it got a few points higher, it would be a real asset to the Dems in 2016.

What is clearly changing are attitudes toward Obamacare.  Once the Supreme Court allowed it to stand yet again, polling for the ACA has surged into (barely) positive territory for the first time in many a moon.  More American now favor than oppose the law, if by the slightest of margins.

And the most recent generic ballot (in May) indicates the Dems are ahead by a bit.  This would auger well for seat pick-ups in 2016.

·         MONEY.  If money talks, look for Jeb/Hillary in November, 2016.  According to the official July filings, Jeb Bush already has raised $120 million, virtually all from Super PACs.  Hillary came in next at $68 million, and the Ted Cruz, the darling of the Tea Party moneymen, raised $53 million.  Marco Rubio also made the big leagues with $42 million, but then there is a huge drop-off to the $10-$15 million level where Bernie, Perry, Christie, Paul, Kasich and Carson are all clustered.  Lincoln Chafee raised $400,000, which I’m certain is less than my own Congressman, Sean Patrick Maloney, has raised this far for his re-election campaign in 2016.

·         IRAN NUCLEAR DEAL:  Trump’s “oxygen sucking” has done a number on the debate over the Iran nuclear deal, relegating it to secondary status in the national conversation.  The GOP candidates will fall all over themselves to see who can trash the deal in the most memorable way on debate night.  But I am watching future Senate Democratic leader Chuck Schumer very carefully.  He is caught between Iran and a hard spot, to say the least, and his pending announcement in the coming weeks of whether he is opposed or supportive will be an important event in this saga.

·         PLANNED PARENTHOOD:  It is time for the bi-annual GOP overreach on Planned Parenthood, as the GOP will once again threaten a government shutdown over defunding the entity in the wake of the release of a series of outrageously misleading videos that were created for the specific purpose of provoking Congress to defund Planned Parenthood and end safe and legal abortion.  The GOP never seems to learn that, (a) most Americans support Planned Parenthood (by a 53/37 margin in a Rasmussen post-videos poll), (b) these shutdowns (or threats thereof) are wildly unpopular, (c) the shutdowns are always blamed (correctly) on Republicans, and thus (d) they do considerable damage to the GOP.
Posted by Tom Gardner at 12:36 PM