BTRTN Midterms Snapshot: Where Should Democratic Volunteers and Donors Focus Their Resources?

Tom with BTRTN’s latest on the 2022 midterm elections.

Our latest BTRTN update highlights modest changes versus our last one two weeks ago, and also offers specific guidance on which races Democratic volunteers and donors should focus their efforts and funds in the final 25 days until Election Day.  The high level summary is as follows:

·        The electoral environment is largely unchanged, as President Biden’s approval rating remains in the low 40% range, slightly higher than in August, but not showing any continued momentum from that time, while the generic ballot has slipped back from D+1 to even.

·        The Senate races overall have continued to tighten, enough to slightly reduce the odds of the Democrats maintaining control of that body, though those odds remain good.  However, the two rating changes we have made are a split verdict: in Georgia, revelations about GOP candidate Herschel Walker appear to have damaged him materially, while in Pennsylvania, the race continues to tighten. 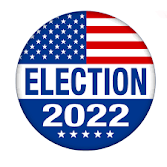 ·        In the House, the Democrats continue to be long shots to maintain control, and need to win virtually every toss-up and leaning race, including those leaning to GOP candidates right now.

·        We can expect the Democrats to flip two state houses rather easily (that is, both are rated "Solid D"); there are seven competitive races out of 36 that provide further flip opportunities for both parties, though in this snapshot all of those others appear to favor the incumbent party.

·        Democratic volunteers and donors should focus their efforts on the highest leverage Senate races, which could come down to three pivotal races.

Here are the latest BTRTN’s odds of the Democrats maintaining each of the two chambers, the expected number of seats that will change parties, and some key metrics, all compared to prior updates.

There is still time for this picture to change.  Remember, these updates are “snapshots,” not “predictions,” based on today’s conditions and data.  (We’ll get into the prediction business on November 7, the day before Election Day.)   October and November surprises could give races a jolt, as one did in Georgia.  But with early voting underway in some states, and only 25 days to go, time is short.

We have made two ratings changes in the Senate, but both remain in the Democrats’ column:

The revelation that GOP (and staunchly pro-life) candidate Herschel Walker paid for an abortion for a girlfriend in 2009, a claim she backed with ample evidence, has shaken up the Georgia race.  Further revelations have occurred almost daily, including savage criticism of Walker by his son.  There have been seven polls since the shocker came to light, more than enough to demonstrate that Democratic Senator Rafael Warnock has benefited from the disclosure, despite the GOP leadership shamelessly closing ranks behind Walker.

In Pennsylvania, Democratic candidate John Fetterman continues to have a material lead over Dr. Mehmet Oz, but the lead is narrowing, primarily due to attacks on Fetterman on the issue of crime.  Fetterman is also being called on to spend more time in Democratic strongholds firing up the base rather than attempting to woo the middle.  Fetterman’s health after suffering a stroke and missing time on the campaign trail, is also a nagging issue for the Democrat.

There are nine “battleground” Senate races (races in which both parties have a legitimate shot of winning) and the Democrats are ahead in five of them.  They need to win four to maintain control of the Senate.  They appear to be successfully defending four seats held by incumbents (although one, Nevada, is extremely close), and have a good chance, at this juncture, of flipping Pennsylvania.  The GOP is ahead in four seats that it is defending, though three of them are extremely close as well. 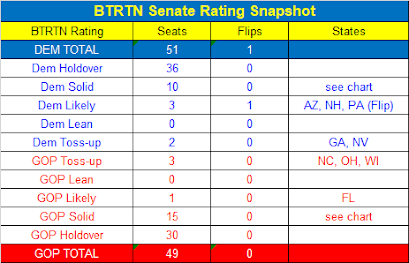 The chart below lists all the Senate races, with a focus on the nine battleground between the two purple lines. 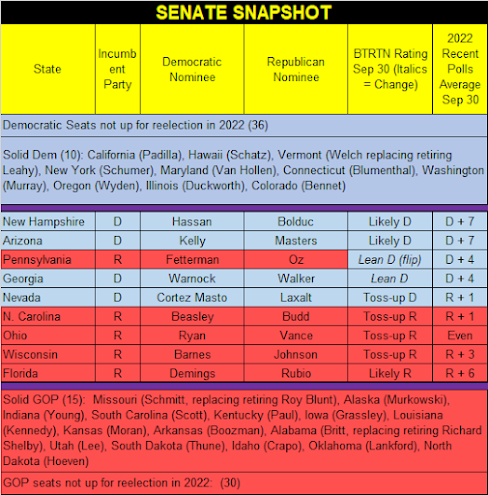 For Democratic volunteers and donors, our guidance would be to prioritize the races as follows

·        Control of the Senate might very well come down to whichever party wins two out of three of George, Nevada and Pennsylvania – those three would be the top priority.

·        The next tier would be to bolster New Hampshire and Arizona, to prevent race dynamics from slipping any further (the GOP candidates have made slight inroads in both thus far)

·        Then North Carolina, Ohio and Wisconsin, all within reach as flips, in that order of priority

·        And finally, Florida, where we remain highly skeptical that Marco Rubio can be beaten

Unlike the Senate, House election outcomes are far more driven by the macro election environment than by individual candidates.  The most important number to watch in terms of predicting how many seats the Democrats will lose is the generic ballot.  This polling question has, over the years, been very highly correlated with gain/loss outcomes, especially in the midterms (which do not have a presidential race to affect turnout and down ballot preferences).

The Democrats have made progress in the generic ballot over the past four months, from a GOP lead of +3 to a dead heat, albeit with recent slippage from D + 1.  The problem is, given the disproportionate GOP representation in the House (due to overrepresentation of small states and effective gerrymandering), the Dems need to do much better than even to have the upper hand in controlling the House.  For this race to become truly competitive, the Dems need to build their generic ballot advantage to D+3 or even D+5.

Given that that has not happened, as yet, we have made little change to Democrats’ prospects for holding the House, with the odds remaining in the low 20% range, or one in five, according to our models, and the mode number of seats lost in our model simulations has dropped to -17. 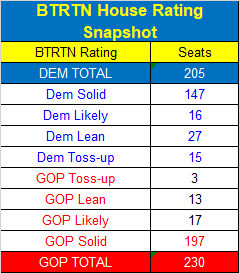 Note: we have slightly narrowed the specification for defining "toss up" races, so there are somewhat fewer of them than in our last update.

There is an argument to be made that volunteers and donors should abandon the House and focus only on the Senate.  Biden would, of course, largely lose his ability to create dramatic legislative triumphs in the next session of the Congress if the Democrats lose the House.  But, if the Democrats hold the Senate, they would continue to have the ability to reshape the judiciary by appointing federal judges to fill vacancies, including new Supreme Court justices.  That is a huge consolation prize, and worth fighting for.

But while it may be too early to throw in the towel on the House, volunteer efforts to bolster the House should be secondary to maintaining the Senate.

To the extent that volunteers and donors want to focus on the House, here are the races that are toss-ups or leaning Republican.  Again, the Democrats have to win virtually all of these races to maintain control, which underlines the long odds facing them, so the focus should be on the races in the right-hand column. 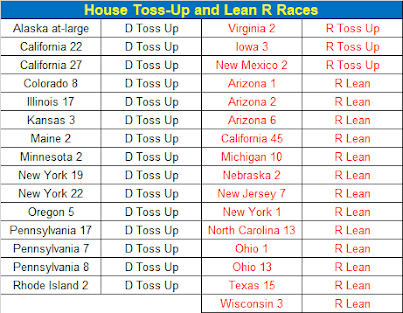 Governors became famous during Covid, wielding authority with impunity once it was clear that Donald Trump was content to leave major decisions to the states.  Andrew Cuomo of New York was perhaps the most famous of all, experiencing an astonishing rise and fall, achieving a national following as the voice of reason and empathy, demonstrated badly needed leadership in the early days of Covid, only to be forced to resign in a sexual harassment scandal months later.  But other governors made a more lasting impression in their Covid management and some, including Ron DeSantis of Florida and Larry Hogan of Maryland, seem poised to translate their newfound celebrity into a run for the presidency.  Not only that, but there is a new realization, in the wake of 2020, on the importance of state elections in controlling the integrity of election processes.

So more attention is being paid to the gubernatorial races in 2022, and there are a whopping 36 of them; two-thirds of all governors’ mansions are on the line.  Of those 36 races, most appear to be solidly in one camp or the other, with only seven that are truly competitive.

Among the races that are not competitive are the only two elections where we see flips, in Maryland and Massachusetts.  Both have GOP governors, in blue states, who have termed out, the aforementioned Hogan and Charlie Baker in the Bay State.  Both will almost surely be replaced by the Democratic candidates in the race to succeed them, Wes Moore (in Maryland) and Maura Healy (in Massachusetts).

While at this point we see no other flips, there are four toss-up races that, by definition, could go either way, and three other races that are classified as “lean” or “likely.”  The snapshot now has the governor outcome at 25/25. 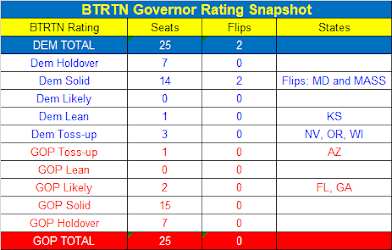 Here are the details on those seven battleground races.  The focus should be on those toss-up races and Kansas. 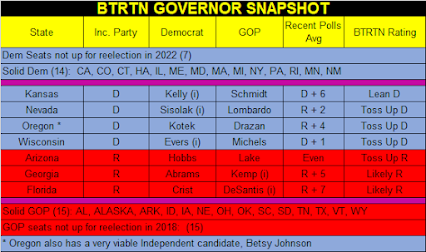 We’ll be back in two weeks with another update.  Stay tuned.