Steve is back with his take on last night's Democratic debate in Des Moines...

It is my sincere hope that each and every one of you had something more exciting to do on a Saturday night at 9:00 than sit at home for two hours watching a democratic debate that had all the volatile rhetoric, interpersonal confrontation, and emotional intensity of Mr. Roger’s Neighborhood. Full disclosure: even I DVR-ed this one.

Those who tuned into the great state of Flyover witnessed what was essentially a pleasant, polite draw. But a draw should never be confused with maintenance of the status quo. A debate that is scored as a draw actively reinforces the relative standing of the competitors, and is therefore a win for the leader.

What did we actually learn from this debate?

The result? The inevitability of Hillary Clinton took another significant step forward in Iowa.

Hillary Clinton had a workmanlike evening; she had good moments, but more importantly, she is proving herself to be the Troy Tulowitski of presidential candidates, as both have phenomenal streaks of errorless performance. She is poised and tough, and she has a well-rehearsed counter-punch at the ready for just about every sling and arrow. 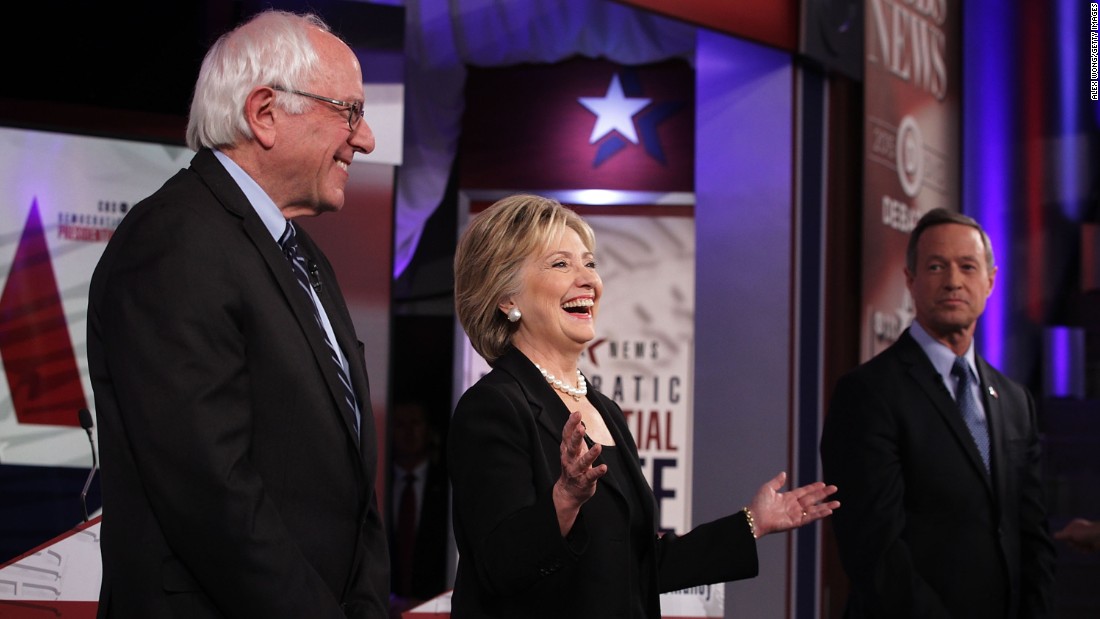 Her highlight for the evening came when Bernie implied that Hillary was hostage to Wall Street interests because she accepts their big-money campaign donations. Hillary pounced, pointing out that as the Senator from New York, she had worked extremely hard to help the financial sector recover from the impact of 9/11. Seeming to race to her side, the moderator turned the question back on Bernie and asked if he could cite evidence that Clinton had actually been influenced by Wall Street money, which drew no response.  Finally, Hillary went on to score her biggest slam of the evening, noting that 65% of her campaign contributions were from women.

In the final question of the evening, CBS handed Hillary what could well have been the most slanted question in modern debate history, asking the three candidates to give an example of a crisis they have handled that proves that they have what it takes to be President.  Hillary seemed to revel struggling to pick which of the dozens of global crises she has faced to make the point, alighting on the decision to send Seal Team Six in get Osama Bin Laden.  O’Malley, showing poise and grace, simply side-stepped, acknowledging that governors are unlikely to face the magnitude of crisis that comes before a president. Implausibly, Bernie Sanders offered that figuring out how to get a bill to improve VA healthcare through Congress was an oval office caliber crisis.

In the end, it was a night of smooth sailing for Hillary, and it is hard to imagine her losing an inch of ground based on this debate.

Bernie Sanders got this far by being Bernie Sanders, just as his evil mirror twins Donald Trump and Ben Carson have done in the Republican Party. All appear to be reaching the peak of what that strategy yields. All must rethink how they go to market to broader their appeal beyond the angry and alienated voters who have propelled their success to date.

To carry this parallel just a bit further, each of these candidacies have been fueled by populist rage at the deafness of centralized power to the needs and wishes of the vast and plundered citizenry. For Republicans, it is rage against the Federal Government. For Bernie, it is rage against the 1%, income inequality, and a political process controlled by big money. One side argues for more government to solve the problems caused by big business, the other argues for more business to solve the problems caused by big government.

At some point, Bernie Sanders has to realize that for present purposes, his opponent is not the 1% or campaign finance law, it is Hillary Clinton. If he really wants to win this thing (and I think it’s perfectly fair to wonder if that ever was his real goal), he has to use much more precious debate time unsparingly and relentlessly going after the real weaknesses and fault lines in Hillary Clinton’s career… beginning with her low ratings on trustworthiness. That’s what people who burn with a passion to win are willing to do: take the gloves off and fight. Until I see Bernie willing to wage that kind of serious trench warfare, it is hard to see how he changes the mojo of this election cycle. Martin O’Malley, on the other hand, is simply playing a brilliant long game. Standing shoulder to shoulder with Hillary and the Doc for two hours over the course of six debates raises his stature, his awareness, and his campaigning skills. He knows that simply running the good race could easily put him first in line in 2020 or 2024. If some colossal smoking gun blows up in Hillary’s face in the next few months, he’s in a terrific position to swoop in and take the nomination in 2016. O’Malley is proving himself to be one shrewd operator – going at Hillary just hard enough to look like a real competitor, but never with the animosity or disrespect that would get a guy crossed off VP lists.

O’Malley had a number of very strong moments, most notably when he told of talking to a soldier’s mother in Iowa, who asked that candidates not refer to troops as “boots on the ground.” “My son,” she told him, “is not a pair of boots on the ground.” O’Malley has a gift for humanizing and simplifying complex policy issues: “Taking on 65,000 Syrian refugees in a country of our size is like adding 6 people to a baseball stadium that holds 32,000 people.”

CBS had a good evening at the Iowa debate.  The moderator and panelists showed a willingness to press the candidates to take clear stands on issues where they sought the refuge of vagary. Most notably, John Dickerson pointedly asked Hilary why she should permanently “tattoo” Bernie Sanders with a vote he had once made favoring the gun lobby, when she herself had tried to distance herself from her vote to authorize the Iraq war. When Hilary said, “I said I was wrong – I apologized – let’s hear him apologize for his vote,” Sanders was left to awkwardly try to change the topic. It was good, real-time theatre; created by a focused and fair journalist.

The fair conclusion on this debate is simple. I think each of these three candidates “won” relative to their own very personal objectives.

I remain unconvinced that Bernie Sanders ever truly sought out to become president, so much as he has sought a very big microphone to pull his party towards its more liberal instincts. By this measure, he is succeeding. And, in the end, Hillary Clinton will benefit from the fact that Bernie is attracting and energizing the millennials. Bernie stays in the race.

Martin O’Malley is practicing and laying pipe for 2020 or 2024. If he continues to prove his effectiveness as a campaigner, he’ll have to be included on Hillary’s short list for VP.

And Hillary Clinton’s objective? She intends to be the first woman President of the United States. And on Saturday night, she took a major step in that direction.