On Super Tuesday the rumbling of the tectonic plates underneath the Republican Party rocked political seismometers from Massachusetts to Virginia and on through the south.  When the quake was over and the Richter scales measured, the political cognoscenti (among whom my brother is becoming the cognoscenti-est) announced that the game was over. The math and the momentum were inexorable; Donald Trump would be the Republican nominee.

Then, the aftershocks began. The explosions from Donald Trump’s Super Tuesday sweep have concussed the Republican Party, leaving it traumatized by Post-Trumpatic Stress Disorder.

This particular form of PTSD can cause irrational behavior, lashing out in sudden fits of rage, nightmarish flashbacks, and an inability to cope with reality.

Irrational behavior? That would be the Republican establishment’s astonishingly frank acknowledgement that the only hope is to actively thwart the will of their voters by taking calculated steps to deny Trump the delegates he needs to sew up the necessary majority before the convention begins. Literally, this means consolidating establishment resources to help Rubio and Kasich win their respective delegate-rich home states.  But publicly announcing that you intend to circumvent the apparent will of the party faithful?  Not even the fascist pigs in Animal Farm exhibited that level of Machiavellian manipulation.

Lashing out in fits of rage? How about the acknowledgment that the Super PACs were lining up to fund scorched earth anti-Trump ad campaigns in Florida and Ohio. Just think about the implications of this for a moment. These two states – along with Pennsylvania – are consistently viewed as the most vital swing states in the November presidential election. So Republican Party PACs are about to spend millions and millions of dollars in an attempt to annihilate their front-running candidate in two states that the Republicans will be desperate to win just months from now. 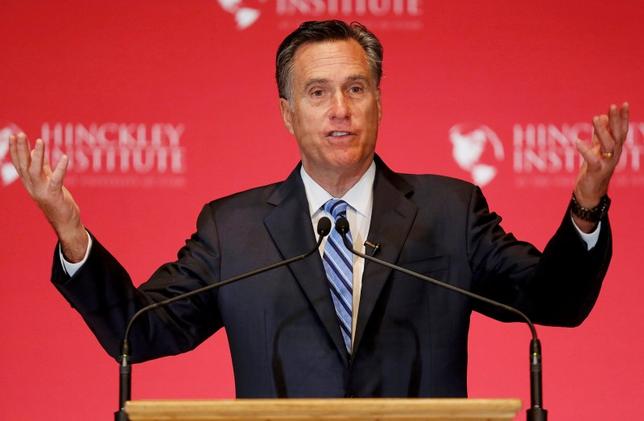 Nightmarish flashbacks?  That would be the sudden reappearance of the last Republican Presidential nominee, Mitt of Amnesia, coming out from hiding on the morning of the debate to deliver a more deliberate, comprehensive, and scathing critique of Donald Trump than he had ever visited on Barack Obama.  Romney – the Republican establishment incarnate – actually spelled out the “anybody but Trump” strategy:  Ohio Republicans should vote for Kasich; Floridians for Rubio in order to deny Trump the delegates he needs. Pour enough molasses into the process and pray for a brokered convention in which the party can turn to a trusted, experienced figure with gravitas and stature. Someone like… oh, never mind.  But at a more shocking level – and while never spoken out loud -- the unmistakable message was that Mitt Romney would urge moderate Republicans to stay home on Election Day rather than see Trump in the White House.

Inability to cope with reality?

Well, that brings me to my coverage of Republican Debate #11.

The truth of it is that the debates are no longer all that relevant. They have morphed from the most exciting reality show on television into tired re-runs of Real Housewives of the Tea Party. Yes, there was a bit of new news coming out of the Michigan debate, but generally speaking, the combatants are now a traveling road show. There are now only four candidates, each are now intimately familiar with the others’ debating techniques; each can anticipate the attack strategies, and each is now schooled with ready rhetorical come-backs and guaranteed “applause” lines.

The net effect of this is that the primary function the debates serve is to reinforce the belief systems of adherents rather than change opinion or shift votes.

The most notable change in the debate was the ever-increasing shrillness – arguably, desperation -- with which Marco Rubio attacks Donald Trump. Marco Rubio is staring his campaign’s very mortality in the eyeball: in less than two weeks, he must overcome a double-digit deficit in Florida or face the oxygen-starving humiliation of losing to Trump in his home state.  He must accomplish this in the face of a decidedly milquetoast showing on Super Tuesday; emerging third in most states, failing to win his best shot in Virginia, and left to make what little can be made of a caucus victory in Minnesota.

Marco Rubio’s candidacy may have ended in this debate. He did his best to take the challenge to Trump; repeatedly scolded the Donald for a lack of specifics in his answers and lack of substance in his policy. He called Trump a con man, and attempted to make the class action law suit filed against “Trump University” a broader metaphor for an electorate that will have buyer’s remorse when it discovers that the man makes unsupportable and undeliverable promises simply to seal a deal. Rubio tried in vain to elevate his critique of Trump’s questionable hotel labor practices into a holy war on hypocrisy.

Trump dealt with Rubio in much the manner that an eighteen-wheeler announces to a Mini Cooper that it is about to change lanes on the interstate.  Tapping into his seeming bottomless pool of contempt and disdain, Trump dismissed the United States Senator from Florida as “little Marco,” thereby adding all adults who may be sensitive about their physical stature to the list of population segments that Trump has flagrantly insulted.  Trump repeatedly interrupted Rubio and talked over him, stamping out his words with greater volume, rendering the stage momentarily indistinguishable from a nursery school squabble about a favored plush toy. Under the pretense of “fighting back,” Marco had made a calculated decision to join Barnum & Bailey, and his reward was to be labeled a circus midget.

In contrast, Ted Cruz has proven more effective in fighting Trump mano a mano than Rubio or any of the establishment governors.  Cruz shows up with a prosecutor’s game plan, and he picks fights that matter.  Cruz went after Trump for his Swiss cheese conservatism, his record of donating funds to liberal politicians, and the risk of allowing a man who lives to make “deals” (read: “compromises”) to decide the fate of the Supreme Court.

Beyond the substantive content, Cruz put on a clinic in how to deal with Trump’s overbearing bullying tactics. He would theatrically pause during a Trump interruption, turn, and urge Trump to “take a deep breath,” the time-honored patronizing advice to six-year-olds having a temper tantrum. It was effective.

The evening also held the long-awaited rendezvous of Fox’s Megyn Kelly and Donald Trump, and it was apparent that Fox wanted to score a knock-down or two.  Chris Wallace challenged Trump on the math of his spending proposals and had obviously anticipated Trump’s standard answers, enabling Fox to immediately pounce with graphics designed to supposedly shame Trump into acknowledging the flagrant misrepresentations of his budget proposals.  Later, Kelly played three paired video clips that showed Trump taking diametrically opposing opinions on the same issue, in one case within 24 hours.

Trump, however, saw absolutely no reason to suddenly change what has been a stunningly successful approach to these debates. He did not allow himself to be lured into a substantive policy debate; rather, he blew off his Fox inquisitors with a nominal amount of bland banter and an imperial wave.  Trump seems to understand that Fox moderators will give up after a point, aware that appearing to be waging a vendetta would damage Fox more than Trump.

Trump has adopted one debating tactic which is effectively inoculating him from the charge that Republicans fear most: flip-flopper. Aware that network news services are filled to the rafters of clips showing Trump advocating contrary positions, Trump pre-emptively asserts that being flexible is actually the earmark of a successful business person.  In Trump Universe, abrupt reversals on policy issues are not “flip-flops,” they are evidence of the mature and wise leader’s ability to constantly absorb ever-changing nuances of data and market shifts, and appropriately update one’s world view. He disarmed Megyn Kelly’s video clip bombs with this reasoning; actually invoking this logic to explain the clip in which he changed his position within 24 hours. So much for wisdom and maturation “over time.”

Trump, in short, had a routine but very effective night, and he knows how these things work: In the face of no shocking revelations, meltdowns, or gaffes, the status quo not only endures but it is reinforced.  Muhammad Ali was widely applauded for his rope-a-dope take-down of George Foreman; in Detroit, Trump stood back and watched Rubio and Cruz expend all their energy flailing away without ever landing a solid punch.

If there was one single moment that hinted at a landmine for Trump, it was the topic of his allegedly “off the record” interview with The New York Times editorial board in which he supposedly acknowledged that his hard line on deportation would inevitably soften as he transitioned into a general election battle. Cruz and Rubio both furiously demanded that Trump authorize The New York Times to release the transcript, essentially asserting that it would be the smoking gun that would reveal his marriage of convenience to party orthodoxy. Trump took this moment to assert the sacred journalistic integrity of off-the-record conversations with The New York Times.  Irony is a dish best served in the “Dining Out” section.

All of this, however, merely provided evidence of an emerging broader narrative that the Trump candidacy is not a revolutionary insurgency at all, but merely a post-social media incarnation of the most tried and true path to the presidency: win the nomination by tacking to the base, win the election by tacking to the center. If the allegations about Trump’s conversation with the Times were to be true, they would simply indicate that Trump knows that the way to win the nomination is to be the most ardent extremist, and the way to win the election is to moderate those positions to become more palatable to the centrists.

As I have been saying for some time now: America, please stop underestimating this guy.

Please, too, begin to give John Kasich an enormous amount of credit. He has not changed his message, he has not given into the popular notion that candidates must all change into pit bulls ripping into Trump. He decided long ago that his best long term strategy was to not be the flavor du jour, but to be John Kasich.  You might say that he is the only player in the Republican Party who is not allowing his brain to be jarred by Post-Trumpatic Stress Disorder. And, here he is, still on the stage, as the race is whittled to four.

There is the fascinating likelihood that Rubio will lose Florida, ending his candidacy, but Kasich wins Ohio. And yes, that would leave Kasich alone in the establishment lane, with Trump and Cruz still in a battle for the role of “outsider.”

Wouldn’t that be interesting?